“The Late Show With Stephen Colbert” returned from summer break with a bang Tuesday, sending up the judge who ruled in favor of a “special master” for the Donald Trump classified docs case with another “fake news alerts” installment.

The bit started with a broadcast TV segment of the news, headlined “Judge Aileen Cannon to Appoint ‘Special Master'” below images of the Florida federal judge and Trump, and images of what appeared to be pages from Cannon’s ruling. 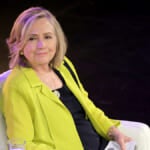 Also Read:
Hillary Clinton Returns to ‘But Her Emails’: ‘I Had Zero Emails That Were Classified’

With that context in place, Colbert’s team rolled out the goods as the unmistakable accordion riff of “Come On Eileen” blasted things off accompanied by a clip from the real music video by the British pop band Dexys Midnight Runners.

A custom voiceover then quickly emerged, sounding impressively similar to the vocals from the 1982 hit.

“Sorr-eeee Deee Ohhh Jaaayy,” the melodic VO rang in, staying on key while referring to the Department of Justice’s setback.

“Your case won’t move faster with a special master ruling from a judge appointed by this bastard,” the lyrics unfolded, while staying in rhythm, over an image of Trump pumping his fist.

The song continued in similar form until the hook returned atop clips of the original classic video.

“Oh screw you Aileen, he stole top secret things,” chimed the VO. “And then mixed them, with Time maaaagaziiines.”

Watch the rest of the video at the top of this post to see how Kid Rock — and maybe even a bucket of KFC chicken wings — played into the final verse. 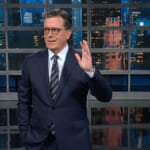