LeBron James’ SpringHill Company will produce a film for Netflix about a Native American style of basketball commonly known as “Rez Ball.” The streamer has set Sydney Freeland to co-write and direct the feature.

Freeland is a Navajo filmmaker known for “Drunktown’s Finest” and the upcoming FX show “Reservation Dogs.” She will direct “Rez Ball” in addition to co-writing with “Reservation Dogs” collaborator Sterlin Harjo.

The term “Rez Ball,” or “rezball,” is short for “reservation ball” and is a style of basketball specific to Native American reservations that involves transition play, aggressive defense, quick scoring and strategic pressure meant to force half-court traps. 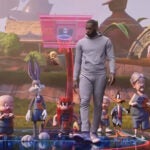 The film is based on a non-fiction sports novel called “Canyon Dreams” by Michael Powell, as well as a New York Times article that preceded it.

“Rez Ball” is a coming-of-age sports drama, and the film is described as “Friday Night Lights” meets “Hoosiers.” It follows the Chuska Warriors, a Native American high school basketball team from Chuska, N.M., that must band together after losing their star player if they want to keep their quest for a state championship alive.

Production on “Rez Ball” will take place in New Mexico, including filming on reservations with the permission and support of the local sovereign tribal nations. 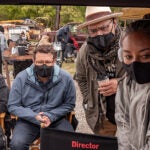 “We could not be more excited to bring this beautiful, powerful story to life with this amazing team. We are eternally grateful to the strategic guidance and advice of the Native American community inside and outside of Hollywood, especially Jodi Archambault (Hunkpapa/Olgala Lakota, former special assistant to President Obama for Native American Affairs), Crystal Echo Hawk (Pawnee, CEO of IllumiNative), Bird Runningwater (Cheyenne/Mescalero Apache, Sundance Institute’s Indigenous Program) and Notah Begay III (Navajo/San Felipe/Isleta, Stanford University, PGA Tour and philanthropist),” Maurício Mota said in a statement.

He continued: “It was through this community that we were connected with the extraordinary multi-hyphenates Sydney Freeland and Sterlin Harjo whom we spent the last several years developing the script with. We are so honored to be working with them and the brilliant team at The SpringHill Company. ‘Rez Ball’ aims to be a love letter to the contributions Native Americans have made to basketball and also a launchpad for Native talent both in front of and behind the camera, ready to make their mark in the industry. We want this to be a blueprint for how to balance excellent storytelling with impact and pipeline development.”

“I am beyond excited to be working with Netflix, Wise Entertainment, and The SpringHill Company to bring this story to life. Basketball on the Rez is like high school football in West Texas. It has a fanatical following that few sports can rival. I’m also excited to be working with Sterlin Harjo on this. He has brought so much insight, humor, and heart to this story,” Freeland said. “This is a story that’s commonplace on Indian reservations all over the US, but most people aren’t even aware it exists. What we want to do is bring people into our world, to tell a story about the people and places we know, and what better way to do that than through a sports movie? We want to tell a story that is authentic to the place and people, told from the inside-out. We are so excited with the team we’ve assembled and can’t wait to bring this to the screen.”