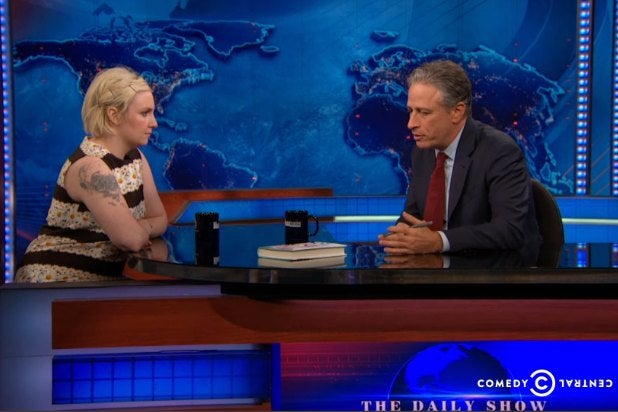 “You take more vitriolic criticism than almost any other performer and writer I’ve ever seen and you handle it with a grace,” Stewart said. “I find it very difficult to fathom because I think your work is really special. I don’t get it. Do you understand it?”

“It’s this double edge sword,” Dunham said. “You have this gift of people paying serious attention to your work and I feel so lucky about that and it’s given me the sense of community in my life that I’ve never imagined I’d have.”

Dunham, who is currently touring to promote her new book, “Not That Kind of Girl,” most recently faced disapproval after she enlisted seven artists to perform for free as warm-up acts on her book tour. After Dunham’s plan to not pay the artists became public, she stated on Monday that all of the artists hired on her tour would be fairly compensated for their work.

“I called Gilbert Gottfried and he offered me a lot of support about how to handle life in the spotlight,” Dunham told Stewart. “It can definitely be challenging.”

“My motto would be I try to react with class and a little bit of sass,” Dunham said.

Both the creator and star of the HBO show “Girls,” Dunham said that her character in the series is two-and-a-half years behind where she is in real life.

“I’m getting to say the stuff I wish I’d said in the moment and handle the situation slightly better,” Dunham said. “In the first installment I must have handled it pretty badly because my character is a total asshole.”

Watch the video of Lena Dunham on “The Daily Show” above.