Leonardo DiCaprio’s Appian Way has acquired the remake rights to an English-language take on “Another Round,” Thomas Vinterberg’s film that on Sunday won the Oscar for Best International Feature.

The remake of the film is being fully financed by Endeavor Content and Makeready, and it’s being developed with DiCaprio set for the lead role.

DiCaprio and Jennifer Davisson won the rights to the remake in an auction. No writer, director or cast is attached yet. 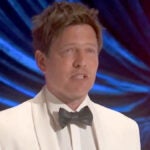 DiCaprio and Davisson will produce for Appian Way alongside Brad Weston and Negin Salmasi for Makeready and Endeavor Content. Appian Way’s Mike Hampton will oversee. Vinterberg will also executive produce.

“Another Round” is a Danish film starring Mads Mikkelsen as a middle-aged history teacher going through something of a mid-life crisis as he finds himself growing duller and losing the interest of his students and his family. As a result, he and three colleagues develop an experiment to try to approach their jobs while drunk and under the influence, but with controlled limits. Though it examines the ups and downs of drinking and alcohol, the film is a celebration of life and embracing your full potential.

Vinterberg wrote “Another Round” with Tobias Lindholm under the name “Druk.” In addition to Best International Feature, Vinterberg was also nominated for Best Director at this year’s Oscars. In his acceptance speech, he explained how the film was dedicated to his late teenage daughter, who was killed in a tragic car accident days into when the film was beginning production.

Vinterberg is represented by ICM Partners and Jessica Sykes at Independent Talent Group.