Actress Letitia Wright is hitting back at a report that she shared negative views about the COVID-19 vaccine while on the set of “Black Panther 2.” In a message posted on Instagram on Wednesday, Wright said it saddens her to have to address what she called a fake news story. “I honestly assert that this was completely untrue,” Wright said plainly.

A report published by The Hollywood Reporter in early October examined how film and TV production has been impacted by those refusing to be vaccinated against COVID-19, and cited sources on the set of “Black Panther 2” who said Wright was sharing anti-vaccine sentiments during the Marvel sequel’s production.

“Anyone who knows me or has worked with me knows that I work incredibly hard at my craft & maintain my main focus is always to do work that’s impactful and inspiring,” Wright said in the Instagram message. “That has been & will continue to be my only focus.” 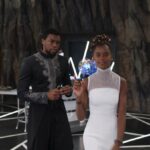 The “Black Mirror” actress concluded the message by saying she will continue to “hold onto God’s hands, and onto the scripture of Isaiah 54:17” before adding that she’ll “continue to focus on my healing” and then thanking fans for their prayers.

Isaiah 54:17 reads, “Weapons made to attack you won’t be successful; words spoken against you won’t hurt at all.”

Wright previously came under fire last December when she shared a video skeptical of the COVID-19 vaccine on Twitter. After backlash, Wright said, “My only intention of posting the video was it raised concerns with what the vaccine contains and what we are putting in our bodies. Nothing else.”

THR’s original report claimed that Wright parted ways with her entire U.S. team of representatives after the incident, although it’s unclear if Wright’s new Instagram message aims to refute this notion as well.

“Black Panther: Wakanda Forever” is in production in Atlanta, Georgia with Ryan Coogler returning to write and direct. The “Creed” filmmaker had to rework the screenplay in the wake of Chadwick Boseman’s shocking death last year, and specific plot details are being kept under wraps. Wright plays T’Challa’s sister Shuri in the Marvel Cinematic Universe.