This is Hollywood, where anything worth doing is worth redoing. Herewith, a few more random observations by way of introduction, so that you’ll know where I’m coming from when I spend the next six months spouting off.

I believe that the Oscar show is, in a way, broken. But it’s probably unfixable, without the kind of drastic changes that would turn it into something other than the Oscar show. 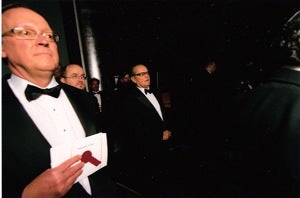 I think there’s something ridiculous about a theater designed like a European opera house sitting at the back of a Hollywood mall.

I like Steve Martin best among recent Oscar hosts, but that might be because he’s extraordinarily low maintenance and doesn’t freak out over letting a reporter watch him rehearse.

I think Chris Rock was underrated. Again, I may be prejudiced in this regard because I saw his loose, irreverent rehearsals, where he hilariously insulted way more people than just Jude Law.

I think that Hugh Jackman was a nimble and able host, and probably a necessary one.

But my God, that song-and-dance thing he did with Beyonce was interminable.

And while we’re at it, I think that until she gets herself an acting nomination, Ms. Knowles has probably reached her quota of Oscar appearances. And then some.

I believe that the next step in Oscar hosts might be to draft a charming, flat-out movie star. But I know it’ll be almost impossible to persuade Tom Hanks, George Clooney or Will Smith to take the gig.

I like upsets and surprise winners, because they make the show more fun.

On the other hand: While “It’s Hard Out Here for a Pimp” would not have been my choice for best song (though Randy Newman assures me that it was the correct choice, and I ought to defer to Rand on all matters relating to film music), damned if its victory didn’t give that entire show a much-needed kick in the pants.

And hey, the best song rarely wins best song, so you’re ahead of the game if you can at least get a little adrenaline shot and a good joke out of that award.

When I say the best song rarely wins, I specifically exempt “The Streets of Philadelphia,” “Falling Slowly,” and “Lose Yourself.”

Also “The Way You Look Tonight” and “Over the Rainbow.”

I know this makes me weird, but I enjoy the Scientific and Technical Awards ceremony.

Not that I need to further embellish my Oscar Wonk credentials, but two of my favorite people around the show are the guys from PricewaterhouseCoopers who supervise the vote counting.

For one thing, if you’re standing on the red carpet talking to the dudes who hold the briefcases containing The Envelopes, the otherwise omnipresent security guards will NEVER ask you to move along. Anywhere else on the carpet, you’re dead meat unless you’re famous.

A while back, I told a high school friend that the Oscar accountants were two of my favorite Oscar people. My friend, a partner at a rival accounting firm that has done plenty of its own awards-show work, said, “Wow. That’s sad.”

I don’t agree, but I see his point.

Now, back to the news.