Robert “Joe” Halderman, the former CBS News producer at the center of a blackmail case that rocked David Letterman and “The Late Show” last fall, pleaded guilty to extortion charges Tuesday in a deal that will land him in jail for six months. 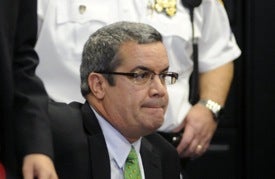 As part of his plea arrangement, Halderman also agreed to four and a half years of probation and 1,000 hours of community service. The ex-“48 Hours” producer had been facing up to 15 years for grand larceny.

"I feel great remorse for what I’ve done," Halderman told the judge. "I apologize to Mr. Letterman and his family."

Halderman is scheduled to be sentenced May 4.

Last November, Gerald Shargel, Halderman’s lawyer, asked a New York judge to dismiss the grand larceny charges against him. (At one point, Shargel even invoked a Tiger Woods “defense,” arguing “that if it’s not a crime for mistresses to seek payoffs from the golf great, his client shouldn’t be punished for trying to make a deal with Letterman.”)

In court papers, Shargel argued that "a hard-driven, arm’s-length commercial transaction does not constitute extortion.”

On Tuesday, Halderman’s story changed. He said his $2 million demand from Letterman was "not a legitimate business transaction,” but a “thinly veiled threat."

In a statement Tuesaday, Letterman said: "I had complete faith that a just and appropriate result was inevitable."

The plea brings to an end a bizarre case, one which Letterman first revealed on the air.

“This morning, I did something I’ve never done in my life,” Letterman said during an October  “Late Show” taping.  “I had to go downtown and testify before a grand jury.”

“My response to that is, yes I have. Would it be embarrassing if it were made public? Perhaps it would,” Letterman said. “I feel like I need to protect these people — I need to certainly protect my family.”

Days later, Letterman’s lawyer said the gap-toothed comedian "is fully prepared to see this case through to the end" and would testify in the case, if necessary.

In the end, he didn’t have to.