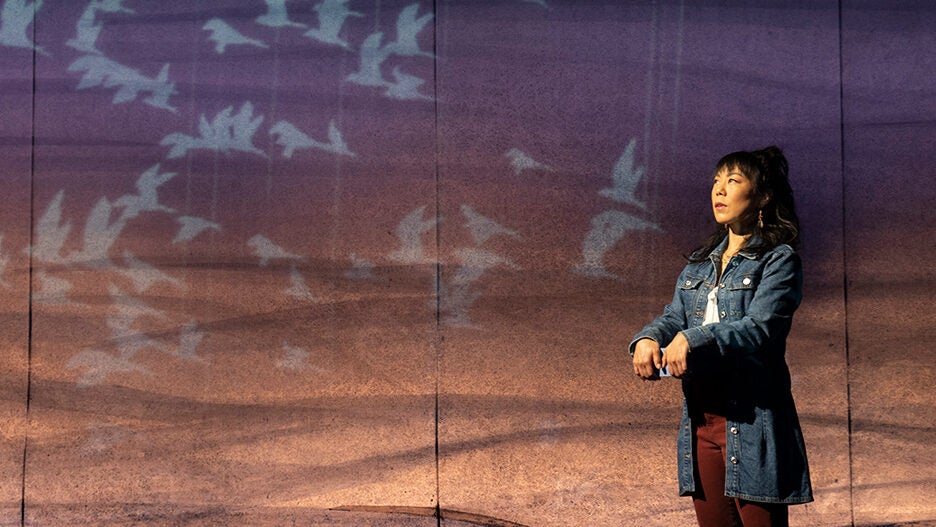 Sometimes it’s worth staying in your seat to the end, even when the previous 80 minutes have been static. For instance, Thom Sesma plays a character named Father Hashimoto in Rajiv Joseph’s new Off Broadway play, “Letters of Suresh,” which opened Tuesday at Second Stage’s Tony Kiser Theater. This Roman Catholic priest living in Nagasaki, Japan, has been the major topic of conversation in the play before we finally meet him, standing under a large Torii. It’s the same kind of arch we’ve been told is a symbol of cultural appropriation in Seattle, because it is used by a botanical garden there to denote Japan. No matter that Mikiko Suzuki MacAdams’ set design uses a Torii here to denote Japan in a theater in New York City.

This is no doubt a minority opinion, but Sesma brought “Letters of Suresh” to life because, for me, he channels one of the great guilty pleasures of my moviegoing career: Otto Kruger’s supremely unctuous performance in the 1954 Douglas Sirk potboiler “Magnificent Obsession,” starring Rock Hudson and Jane Wyman. Sesma has that same overly modulated speaking voice and beatified smile that Kruger used to describe the holy beauty of the “magnificent obsession.” I’ve seen this Sirk film several times and never been able to understand what the hell Kruger is talking about. Same goes for what Sesma tells us at the end of “Letters of Suresh.” Undoubtedly, it’s profound, not to mention pretentious.

We know it’s both those things because 1) Father Hashimoto lives in Nagasaki and survived the atomic bomb, and 2) he and his pen pal Suresh Thakur (Ramiz Monsef) talk a lot about the heart of the blue whale, which is so large that a human being can walk through its valves, if that person happened to be Jonah. Oh, and the blue whale’s heart pumps 60 gallons of blood every beat. 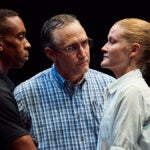 Also Read:
‘Is This a Room’ Broadway Review: Whistleblower Reality Winner’s Trauma in Her Own Words

All this talk of whale hearts is supposed to make us contemplate nature, God and our existence on Earth and in the cosmos. Instead, it made my mind wander to the environmental disaster that is Japan’s refusal to outlaw whale hunting. Joseph doesn’t mention this atrocity in “Letters.”  He also doesn’t mention Pearl Harbor or Japan’s brutal decades-long occupation of Korea, even though Father Hashimoto’s great-grandniece Melody Park (Ali Ahn, being very solicitous), now living in Seattle, is the daughter of a man born in Korea.

May Adrales’ direction is enhanced by Shawn Duan’s gorgeous projection design, which gives the production its only sense of motion. Adrales leaves Monsef adrift to play Suresh as if he were hyperactive and mentally challenged, even though he is a self-professed genius. When we first meet him, Suresh is also only 18 years old, an age in no way projected by Monsef. Only later are we told what career Suresh chooses in his adult life, where he’s unquestionably a genius and not a very nice one.

Joseph keeps highlighting one refrain in his play, and it goes like this: There’s “no love without a cross and no cross without a victim.” So, is Suresh’s lack of love the reason Father Hashimoto is a victim on a cross? Or are all those slaughtered whales (227 per year) in Japanese waters the real victims?

As one would expect from the title, most of Joseph’s play has us listening to Suresh, Melody and Father Hasimoto read letters. A fourth character, Amelia Wren (the understated Kellie Overbey), plays Suresh’s love interest, and she gets to use the slightly more dramatic form of communication that is FaceTime and texting.