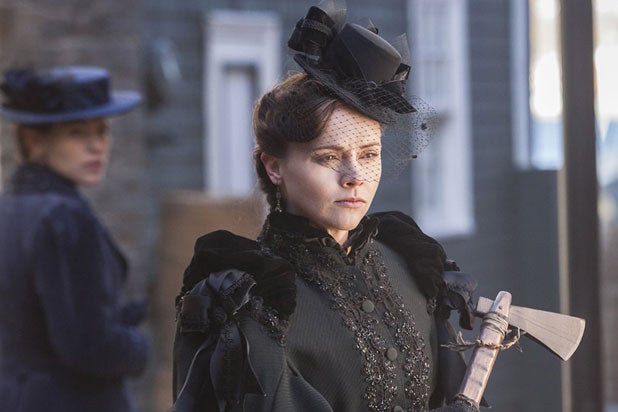 It seems such a shame to waste such diabolical talent as Christina Ricci‘s. From “The Addams Family” to “Speed Racer,” “Monster” and on, Ricci adds a twisted gothic spin to anything she appears in.

Though it might seem to be, the role of the titular ax-murderer in Lifetime eight-part limited series “The Lizzie Borden Chronicles” is not the best use of her unique interpretation of the universe.

Sumptuous costuming and a believable period setting aren’t enough to make up for weak storylines that intend to make more of killer Lizzie than she actually was — though some theories do argue that she was innocent of the murders of her father, Andrew, and stepmother, Abby, on August 4, 1892.

“Lizzie Borden took an ax,
And gave her mother 40 whacks.
When she saw what she had done,
She gave her father 41.”

So the old rhyme goes, but is it enough to build a series on?

Lifetime’s “Lizzie Borden Chronicles” is the follow-up to the TV movie “Lizzie Borden Took an Ax,” which saw Lizzie’s first crime of whacking her mom and dad. The Lifetime series seems to aspire to the critical recognition of A&E’s “Psycho” prequel, “Bates Motel,” but doesn’t accomplish the gravitas of the Vera Farmiga and Freddie Highmore-starring series.

In the original TV movie, Lizzie is a sociopath and a thief with loose morals on top of it all. She seduces her own father. It’s all terribly distasteful, but never quite makes it to “entertaining.”

In a role she continues from the movie into the series, Clea DuVall plays Emma Borden, Lizzie’s older sister and a substitute maternal figure.

Four months after Lizzie’s acquittal for the murder of her parents, Lizzie and Emma try to secure their inheritance, but are thwarted by creditors — one in particular, William Almy (John Heard), who is owed so much by their father that he lays claim to all of their property, putting the sisters in desperate straits.

That difficulty is compounded when their shiftless half-brother William (Andrew Howard) shows up — a black sheep with a nasty bite.

Through it all, sociopath Lizzie glides through the streets of Fall River, Massachusetts, an exonerated murderer trailed by goggle-eyed, tittering children and the stares of dumbstruck adults.

Unencumbered by her father’s frugality, Lizzie makes a play to improve her and her older sister’s lives with a house in the posh part of town and socializing with New York theater luminaries, including Nance O’Keefe (Jessy Schram).

Naturally, however, a few pesky people stand in her way.

“The Lizzie Borden Chronicles” is a fictionalized account of the historical curiosity’s life in infamy. In truth, the former Sunday school teacher lived a relatively quiet life after the murders — at least, she wasn’t accused of whacking anyone else — and died in 1927 at age 66. Her sister, who had moved away to escape the notoriety that followed Lizzie, died nine days later at age 76.

It’s painful to witness an attempt at clever counter-programming go badly, but the Easter Sunday debut of “The Lizzie Borden Chronicles” unfortunately lands with a thud.

“The Lizzie Borden Chronicles” premieres Sunday at 10 p.m. on Lifetime.