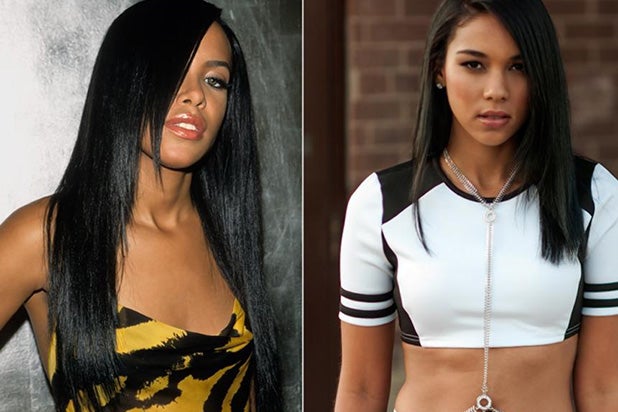 Alexandra Shipp, the lead of Lifetime’s “Aaliyah: The Princess of R&B,” takes pride in her performance as the late “Rock the Boat” singer. But, she admits controversy surrounding the role initially caused her some anxiety.

“I was really kind of grappling with it because one girl had dropped out, and there was controversy about it,” Shipp told TheWrap.

Before the actress’ phone rang, the Lifetime TV original movie was plagued with troubles: First they lost their original topliner, Zendaya, amid controversy when fans complained that the biracial Disney star was too fair-skinned.

Then there were reports that Zendaya wasn’t satisfied with the limited song catalogue the film was forced to work with, after Aaliyah’s family members actively withheld rights to her music and various content.

Also read: Aaliyah's Family Speaks Out on Biopic: Lifetime Is the 'Wrong Forum'

Shortly after all the drama erupted, Aaliyah’s family spoke out publicly against the film, prompting executive producer and daytime host Wendy Williams to respond. She reassured fans and the family saying the project would be made in good taste.

The script landed at Shipp’s door as she was wrapping her lead role in VH1’s “Drumline: A New Beat.” But the actress admits she had reservations.

“I don’t feed into the controversy necessarily, but I do know it’s out there. I wasn’t sure I had thick enough skin to take on the project,” Shipp said.

She sought guidance from her “Drumline” director Bille Woodruff, who had plenty of insight and even directed Aaliyah in the 1997 music video for Timbaland & Magoo’s “Up Jumps da Boogie.”

“He said, ‘I believe in you’… he told me to go for my dream and if this is something that I really wanted to do I should go and shine my light,” she said.

TheWrap also spoke with Woodruff, who revealed he referenced Jennifer Lopez‘s red-hot career when Shipp came to him with her concerns.

Also read: Zendaya on Exiting Lifetime's Aaliyah Movie: It 'Wasn't All the Way There'

“I said … ‘You have to just show people. Like when was doing ‘Selena.’ There was all kinds of flack and people being upset because she was doing that role, but it ended up being a wonderful, amazing movie that did great things for her career.” Woodruff said.

“I worked really hard on it and I’m happy with the work that I’ve done. Everyone is a critic, right?” she said.

“Aaliyah: The Princess of R&B” premieres Saturday at 8 p.m. ET on Lifetime.

Jethro Nededog and Anita Bennett contributed to this report