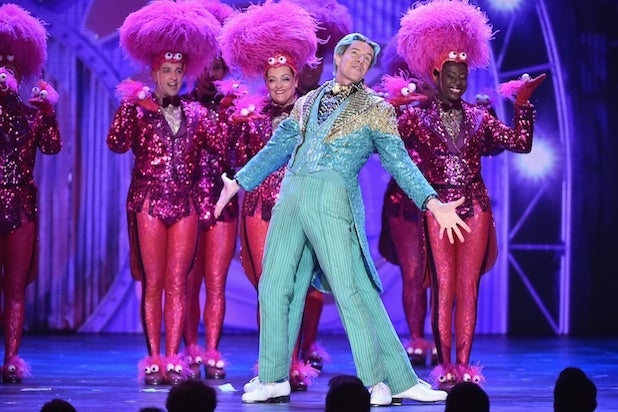 This story about Robert Dickinson first appeared in the Down to the Wire issue of TheWrap’s Emmy magazine.

It’s no surprise that Robert A. Dickinson has three of the five nominations in the Outstanding Lighting Design/Lighting Direction for a Variety Special category: one for the Oscars, one for the Grammys and one for the Tonys.

Of his three nominations this year (where he and his team are also competing against “Jesus Christ Superstar Live in Concert” and the Super Bowl halftime show), the one for the Tony Awards is the biggest surprise.

It’s Dickinson’s third nomination for the Tonys, a show that typically does very well at the Emmys. But because last year’s show was hosted by the since-disgraced Kevin Spacey, CBS and the show’s producers decided to sit out the competition this year.

Still, Television Academy rules allow anyone who’s eligible for an Emmy to submit an entry, which one of the members of Dickinson’s team, lighting director Noah Mitz, did.

“I do find it sad that I’m the lone representative for such an important production,” Dickinson said. “The Tonys are without question one of the most difficult productions mounted for television, and I can’t speak to why no one but the lighting department felt it represented their best work.”

Also Read: Tony Awards 7 Biggest Snubs and Surprises, From 'Once on This Island' to Tina Fey

At the Grammys: “We’re usually trying to interpret musical content from scratch. We’re not trying to mimic any other performance or presentation of that music, we’re creating something new.”

And at the Tonys, he said, “we’re trying to replicate the audience’s experience in the theater and make it successful on television, which requires a lot of nuance.”