Disney devoted a whopping 30 minutes of its CinemaCon presentation to Pixar’s “Lightyear,” showing theater execs what Angus MacLane’s spinoff of “Toy Story” is all about.

The film shows the prideful Buzz Lightyear (Chris Evans) in an exploratory mission gone horribly wrong as his ship, and dozens of Star Command crew members, are marooned on an alien planet crawling with hostile tentacled creatures.

With the help of his closest friend Alisha Hawthorne (Uzo Aduba), Buzz tests a new hyperdrive system to get his crew off the planet. But not only does that test fail, his hyperspeed experiment caused him to travel four years into the future. Which means that every time Buzz flies into space to try to get the hyperdrive to work, he sees Alisha and everyone on his crew get significantly older. 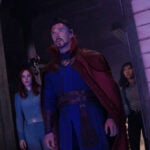 Also Read:
We’ve Seen the First 15 Minutes of ‘Doctor Strange in the Multiverse of Madness’

Despite this, Buzz tries over and over again, seeing Alisha get married, have children and go through her life on the planet with her family. But every time, his experiment fails, and one day, Alisha is not there when he returns. Now, more than 60 years since he first crash landed on the planet, Buzz must team up with Alisha’s granddaughter Izzy (Keke Palmer) along with his robot cat companion Sox (Peter Sohn) to finish the mission.