An Oklahoma movie theater that warned parents about a brief kiss between two female characters in the Disney/Pixar movie “Lightyear” and promised to fast forward through the scene has decided to show the film in its entirety after the message was shared online.

The note posted on the front door of the 89er Theater in Kingfisher, Oklahoma read, “Warning. Attention Parents: The management of this theatre discovered after booking ‘Lightyear’ that there is a same-sex kissing scene within the first 30 minutes.” They promised to try to fast-forward through the scene, but that their efforts to shield patrons from the brief liplock “might not be exact.”

The movie theater’s owner told local ABC channel KOCO 5 on Tuesday that they had taken down the sign and won’t be fast-forwarding.

One woman who took her two sons to the movie told KOCO she didn’t mind the scene. “Watching it, it was no big deal. It was like two seconds. Maybe like one second if you were really paying attention.”

Chris Evans, who voices Buzz Lightyear, told Reuters earlier this month that people who are protesting the kiss, which happens between Alisha (voiced by Uzo Aduba )and her partner, are “idiots.” He also told USA Today that this kind of representation is “long overdue.”

Aduba told USA Today, “What this film does is handle love and those stories the way that they should be, that they are not the totality of a person. It’s addressed with the same simplicity as we address any type of love, and I think that’s the way it should be.”

Disney originally cut the scene, but restored it after employee protests over its initially tepid respond to Florida’s “Don’t Say Gay” bill, which has since been signed into law. 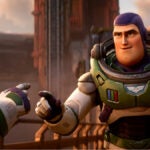