Lil Nas X is speculating as to why Tony Hawk’s new blood-infused skateboards aren’t stirring up quite the same satanic panic his bloody sneakers did.

On Wednesday, the “Industry Baby” rapper tweeted about what he feels is a double standard in the public’s relatively mild reception of Hawk’s boards compared to the widespread condemnation of his similarly macabre sneakers earlier this year.

“Now that Tony Hawk has released skateboards with his blood painted on them, and there was no public outrage, are y’all ready to admit y’all were never actually upset over the blood in the shoes?” he wrote. “And maybe u were mad for some other reason?”

Lil Nas is of course referring to his and the pro skater’s differing identities and therefore privileges in society, the former being a queer Black man and the latter a straight white man.

Hawk’s skateboards, a publicity stunt for water brand Liquid Death, sold out in minutes with little to no criticism on Tuesday. According to Insider, “Birdman” gave two vials of his own blood, which was then mixed into the paint used on the boards. The design features a drawing of a topless man whose head has been replaced by a can of water. He is also carrying a bloody ax and the skull of a hawk.

All 666 of Lil Nas’s “Satan Shoes” also sold out rapidly once they were announced in March but never hit shelves after being labeled as “disrespectful” (oh, and that Nike lawsuit). The shoes were a promotion for the rapper’s upcoming “Montero (Call Me by Your Name)” music video, which featured him giving Satan a lap dance before murdering him and taking over his throne in hell.

The Twitterverse is divided as to whether the difference in backlash was racially and homophobically motivated or whether it was Lil Nas X’s (real name Montero Lamar Hill) enhanced anti-Christ imagery that rubbed people the wrong way.

Check out some of the discourse here. 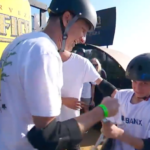