Lindsay Lohan has lined up a role in a Netflix rom-com. The “Mean Girls” alum will star in “Irish Wish,” the streamer announced Thursday.

The deal, part of Lohan’s two-picture creative partnership with the streamer, sees the actress playing Maddie, who heads to Ireland to be a bridesmaid after the love of her life gets engaged to her best friend.

“Days before the pair are set to marry, Maddie makes a spontaneous wish for true love, only to wake up as the bride-to-be. With her dream seeming to come true, Maddie soon realizes that her real soulmate is someone else entirely,” reads a logline from the streamer. 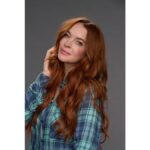 Lohan has a holiday film coming to Netflix — the Janeen Damian directed “Falling for Christmas” — which premieres Nov. 10 on the streamer. No details were available on when “Irish Wish” might debut.