With ‘Lingui, the Sacred Bonds,’ Chad’s Top Director Hopes to Change How His Country Views Abortion

TheWrap magazine: ”I’m used to making films about men, but I knew I had to become a spokesman for these women,“ Mahamat-Saleh Haroun says

A version of this story about “Lingui, the Sacred Bonds” first appeared in the International issue of TheWrap’s awards magazine.

Over the last 19 years, the African country of Chad has only submitted three films to the Oscars Best International Feature Film race – and all three of them were directed by the same man, Mahamat-Saleh Haroun. He is not only the country’s best-known director, but one of its only working filmmakers, with movies that include “Abouna” (Chad’s 2002 submission) “GrisGris” (its 2013 entry) and the new “Lingui, the Sacred Bonds.”

Haroun discussed his new film, is an understated drama about a 15-year-old girl who becomes pregnant and must turn to her single mother for help in a country where abortion is illegal.

Your previous movies have all focused on male characters. What made you decide to focus this one on women?
It’s because I saw a lot of articles in local newspapers here in Chad about young girls who become pregnant. And it’s a kind of shame, because it’s taboo for a young girl to become pregnant without getting married. We have a lot of cases of a young woman throwing a newborn child into a toilet or in the garbage. It reminded me of a trauma from when I was 6 or 7 years old in Abéché, and we had the same situation.

So when I found that the problem is still there, I started making an investigation.  And I wanted to make this film to let people know about the condition of being a woman in Chad. I’m used to making films about men, but in this case, I became conscious that I have to become a spokesman for these women.

How did you find your two lead actresses,? They’re both extraordinary, but they haven’t made films before, have they?
No, they are nonprofessionals. But they have their own sincerity, and they know about this problem because it’s very real. The main character, the mother, Achouackh Abakar Souleymane, she lived in the United States, in L.A., for 10 years and dreamed about becoming an actress. She worked on one of my films, “GrisGris,” as a costume designer, and she told me that she wanted to act. And the young Rihane Khalil Alio, who plays the daughter, I knew her sister. She has something very mysterious about her, and I thought that she could do it.

Did you rehearse with them a lot to prepare them for the roles?

We rehearsed some, but with nonprofessional actors you want to keep the freshness. We put them together for 12 weeks – they lived together in the same house, and that made them very close in real life and helped to create that mother-and-daughter relationship.

Now that the film is being shown in Chad, do you think it can have an impact?
Definitely. I think it’s going to have a huge impact. We will have, maybe, a change, because a lot of people are very touched and they want to speak about it. I’m waiting to screen the movie to the parliament, the congress here, and to let them understand the situation of women. This is a useful film, I think.

You live in Paris, but most of your films are set in Chad. Is it important for you to keep returning to the country to work?
Yes. I spent the first 20 years of my life in Chad, and as an artist you always bring your childhood to what you do. I have these memories, and I have to tell stories about these people, because if I don’t make a film in Chad, you can miss images from this country.

I want to bring images of Chad all over the world. That’s my ambition. There is a kind of lingui bond, you know, between my country and me.

What does that word, lingui, mean to you?
The spirit of kindness, a spirit of solidarity. And I want to remind people that if you break these sacred bonds, you bring the conflict. 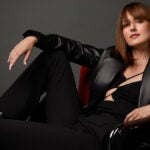