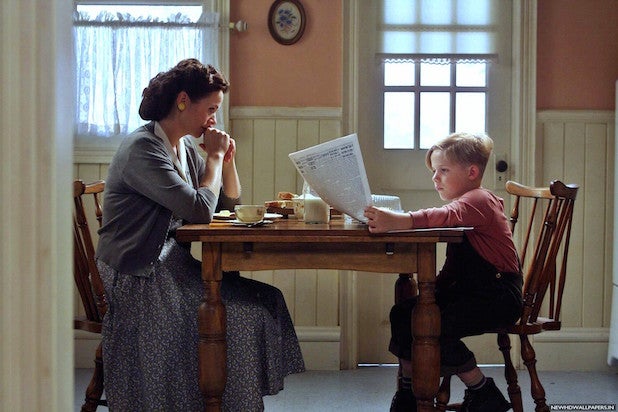 The studio description of Mark Burnett and Roma Downey‘s new faith-based film “Little Boy” calls it “powerful and moving,” but the majority of critics prefer adjectives like “manipulative,” “shameless” and “deeply stupid.”

The drama set in a sleepy California town during World War II has a mere 12 percent approval rating from a total of 33 critics counted, so far, on Rotten Tomatoes.

Also Read: 'Little Boy' and Me: What My Next Movie Teaches About Race, Stereotypes (Guest Blog)

TheWrap‘s Inkoo Kang applauded the movie for being a “fine model of how religion can and should do more to fight against prejudice,” but felt it was entirely too “artificial.”

“Worthwhile ideas are contained in a phony-baloney tale more artificial than a polyester teddy bear stuffed with Splenda and Cheez Whiz — and just as appealing,” she wrote in her review. “In arguing for the possibility of miracles, ‘Little Boy’ performs one of its own by slowing down time. The experience isn’t unlike watching a reluctant child eat her vegetables: You’re glad she’s getting the nutrition she needs, but you can’t help wondering why in the world you’re sitting there watching this utter non-spectacle.”

“The movie is, like a [Norman] Rockwell painting, a formally well-crafted thing. It’s also pretty much full of baloney. Unlike Rockwell’s art, whose old-fashioned themes — family, faith, patriotism, community — were expressed via the ground truth of human nature, ‘Little Boy’ traffics in cartoonish caricature,” O’Sullivan wrote. “It isn’t just human nature that suffers from the distortion, but the film’s portrayal of God.”

Los Angeles Times critic Robert Abele called wrote that the film “is a lesson, shiny and obvious, but it’s hardly spiritual in any meaningful sense.”

On the other coast, New York Times critic Stephen Holden referred to it as a “tear-stained lump of hokum,” which like baloney, is a synonym for nonsense.

“In the most preposterous scene, Pepper’s desperate arm-waving attempt to prove that faith can move mountains coincides with an earthquake, earning him the awe of the bigoted, credulous townspeople, who cheer when news arrives of the bombing of Hiroshima,” Holden wrote. “The queasiest moment of this crass, manipulative claptrap is the mention that the bomb was named Little Boy.”

“It’s meant to be a tale of uplift for faith-based audiences, but instead wears viewers down with a heavy-handed narrative, an overbearing score and voiceover that spells out everything in cringe-inducing, folksy tones,” RogerEbert.com critic Christy Lemire wrote before concluding: “But even by the standards of this genre, the sentimental way in which the story twists and wraps up is as shameless as it is schmaltzy.”

Village Voice critic Alan Scherstuhl was among the harshest when judging the release from Open Road Films.

“Faith here isn’t something private that might nurture us through this world’s cruel caprices — it’s a promise that everything will work out, that a Superman-God will spin the world backwards for you,” Scherstuhl wrote. “Imagine a real child, of today, who has lost a parent in America’s desert campaigns. Imagine that child puffed up on Little Boy and its ilk, praying, hurting, maybe shouting arggggh! Imagine that child taking to heart the lesson of this cynical, poisonous, deeply stupid film: If the miracle fails to come, you must not have believed enough.”