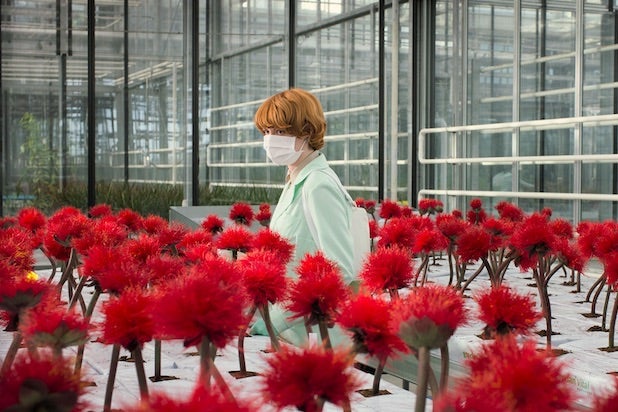 “Fear can affect our perception of reality,” says an inquisitive shrink about halfway through “Little Joe,” Jessica Hausner’s highbrow horticulture horror flick (say that three times fast) that premiered at the Cannes Film Festival back in May, with lead Emily Beecham winning the festival’s Best Actress award. And if that observation might be the case for the beleaguered mother at the center of this sci-fi head-trip, it is entirely the other way around when describing Hausner’s intentions.

With her English language debut, the Austrian filmmaker has channeled her perceptions of fear, taking a common reality — that which parents face when their kids reach adolescence – and refracting the myriad anxieties and uncertainties of that stage of life as a gonzo genre freak-out.

Repurposing parental anxieties into psychological horror, “Little Joe” offers kind of thematic follow-up to David Lynch’s “Eraserhead” — only now the terror doesn’t come from an alien figure that requires constant care and attention, but one that has accepted that attention and is ready to move on.

Beecham plays Alice, a professional flower-breeder and mother to Joe (Kit Connor). With her colleague Chris (Ben Whishaw), Alice has just bred her most promising genetic modification yet, and in honor of her son, she calls it Little Joe. Resembling something like a giant bulb of saffron as designed by Dr. Seuss, the Little Joe plant feeds on love and care and provides happiness in turn, as it was bred to emit the same hormone that bonds new mothers with their children.

As is often the case in such narratives, the creation takes on life of its own when it senses danger to itself. You see, Alice has bred the flower to be sterile, so Little Joe must do what it can to guarantee its future existence – because, as someone else in the film says, “the ability to reproduce gives every living being meaning.”

The flower does so by a kind of mind control, producing pollen that increases the happiness of all who smell it, while making them fiercely loyal to it above all else. It creates a kind of “Invasion of the Body Snatchers” dynamic. Alice resists, but others in her orbit fall under the flower’s sway, with her son becoming one of its most prominent adherents.

Hausner doesn’t go for scares, opting to mount this psychological horror film as procession of colors that grow more vivid as the flowers grow in influence. Shot with crystalline digital photography, the images have a hypnotic pull, with the flat clinical light of an industrial nursery gradually growing to almost violent levels of contrast.

The director has plenty of fun with the film’s costumes and design, dressing the characters in dollhouse pastels and giving Beecham a veritable helmet of auburn hair. If the film can be somewhat unsubtle in its thematic questions, it matches that with an equally loud color palette – and you know what, that’s perfectly fine. What more can you ask from a film about a mind-controlling flower?