Logan Paul, the controversial and outspoken YouTube personality who has recently reinvented himself as a pro wrestler and boxer, has signed a deal with World Wrestling Entertainment.

On Thursday, he shared photos and videos of himself (watch above) at the WWE headquarters in Connecticut, signing his contract ahead of the SummerSlam event.

Paul also had a message for fellow WWE wrestler The Miz, following their dust-up at WrestleMania. He held up a sign that said: “I’m coming 4 U @Miz.” Ominous. 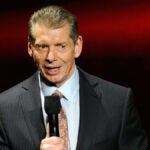 The signing comes at a particularly touchy time for the WWE, with misconduct allegations leveled at longtime executive (and star) Vince McMahon leading to him stepping down from his post and installing his daughter Stephanie McMahon as “interim chief executive and chairwoman.” (Since he stepped down, it hasn’t been made clear how much power he has actually ceded.) Then last week, the organization’s first female referee resurfaced allegations that McMahon raped her; this time in New York Magazine.

At only 27, Paul’s career has zigzagged all over the place, from Disney Channel prank shows to Z-grade movies and everything in between. He has courted controversy before as well, most notably in 2017 when he filmed a video in Aokigahara’s “suicide forest,” including filming the body of a suicide victim.

Paul also famously implied that homosexuality was a choice and that he was going to “go gay for a month.” Over the last few years he has become an amateur sportsman, taking part in boxing matches (including one against Floyd Mayweather) and wrestling matches with the WWE.