Few things are more embarrassing than losing a “The Lord of the Rings” trivia game when you starred in “The Lord of the Rings” films — except for losing that game in front of filmmaker Peter Jackson. That’s what happened to Dominic Monaghan and Billy Boyd, who played hobbits Merry and Pippin in Jackson’s “LOTR” trilogy, when they stopped by “The Late Show” on Wednesday and went head-ot-head with host Stephen Colbert in a battle for J.R.R. Tolkien fan supremacy.

Monaghan and Boyd, who run the “LOTR” podcast “The Friendship Onion,” were actually the ones who started the game with Colbert, a self-professed “LOTR” nerd, in exchange for a very, special secret prize. But once he had been stumped by a very tricky question, he decided to bring in a pre-recorded video of Jackson to try to get back at Monaghan and Boyd with an even tougher query.

“I want to actually ask Stephen to get involved in this because we’ve got to basically answer the question: Who knows Merry and Pippin better, Merry and Pippin, or Stephen Colbert?” Jackson said on screen. “So this is going to decide things. Now this question is a two-part answer, so I need two answers within the same question. So let me ask the question first and then you’ve got five seconds. Very little known fact that a hobbit invented the game of gold. And what I want to know is did Merry or Pippin descended directly from the hobbit who invented golf and what was the name of that hobbit who invented golf.” 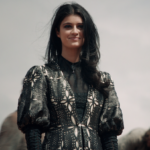 “Pippin! And his name is Bullroarer Took,” Colbert shouted.

A panicking Monaghan asks Boyd if he knew, to which he replies, “I knew that it was Pippin, but I did know who the hobbit was who invented golf.”

Now to Jackson on the video: “Okay, wrong. Well, it would surprise me if Stephen got that right. But anyway, the name of the hobbit who invented golf was Bullroarer Took. And a little bit of a trick question because both Merry and Pippin descended from Bullroarer Took due to the wedding of Saradoc Brandybuck with Esmeralda Took. And you’re actually first cousins. I hope you know that, I’m sure you do. So any way, I think I’ll just declare Stephen the winner anyways because he likes being the winner. So let’s just give him that.”

Also Read:
‘Simpsons’-‘Loki’ Crossover Short Film ‘The Good, The Bart and The Loki’ Set at Disney+

Since Colbert was declared the winner fair and square (we guess), Monaghan handed over his prize: a pair of Merry ears from the “LOTR” set.

(For the record, the character’s full name is Bandobras “Bullroarer” Took. But we’re not about to go up against Jackson in “LOTR” trivia.)

Watch Colbert’s full game of “The Lord of the Rings” trivia with Monaghan and Boyd via the video above, which includes a question that Monaghan and Boyd actually managed to stump Colbert on before Jackson got involved.