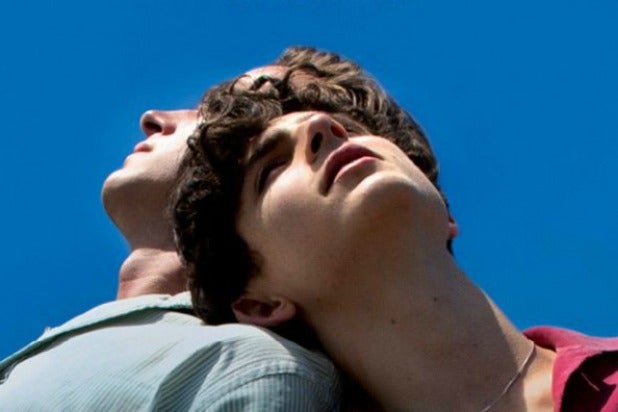 Luca Guadagnino’s rapturous coming-of-age romance “Call Me by Your Name” has been named the best film of 2017 by the Los Angeles Film Critics Association, which announced its annual awards on Sunday.

Timothée Chalamet and Sally Hawkins were named best actor and actress for their performances in “Call Me by Your Name” and “The Shape of Water,” respectively, with James Franco the runner-up to Chalamet for “The Disaster Artist” and Frances McDormand runner-up to Hawkins for “Three Billboards Outside Ebbing, Missouri.”

Guadagnino and Guillermo del Toro (“The Shape of Water”) tied in the best-director category.

“The Shape of Water” won the most awards from LAFCA, with three first-place awards (actress, director and cinematography) and another two runner-up finishes.

Agnes Varda and JR’s “Faces Places” was named the year’s best nonfiction film, the foreign-language category ended in a tie between “BPM (Beats Per Minute)” and “Loveless” and GKIDS’ “The Breadwinner” beat Pixar’s “Coco” for best animated film.

Jordan Peele received the screenplay award for “Get Out,” with Martin McDonagh the runner-up for “Three Billboards.”

Founded in 1975, the Los Angeles Film Critics Association is made up of nearly 60 critics based in Southern California.

Particularly in the acting categories, the LAFCA is known to make more idiosyncratic choices than most awards bodies. This year, though, their acting choices were picks that had already received significant support on the awards circuit, particularly Dafoe and Metcalf.

Overall, this was one of the most mainstream slates of awards the Los Angeles critics has given out in years, spreading the love among a number of this year’s top contenders: “Call Me by Your Name,” “The Shape of Water,” “The Florida Project,” “Three Billboards,” “Dunkirk,” “Lady Bird,” “Mudbound” and “Phantom Thread.”

Conspicuously missing in action was Steven Spielberg’s “The Post,” which swept three top awards from the National Board of Review but was then shut out by the two top regional critics groups, the New York Film Critics Circle and Los Angeles Film Critics Association.

Also Read: National Board of Review Names 'The Post' the Year's Best Film

The LAFCA best film winner has gone on to win the Oscar for Best Picture only three times in the last 20 years, but two of those came in the last two years with “Spotlight” and “Moonlight.” (The other was “The Hurt Locker” in 2009.) Other recent winners include “Boyhood,” “Amour,” “The Descendants,” “The Social Network” and “WALL-E.”

But despite the lack of overlap in the top category, about a half-dozen of the Los Angeles Film Critics Association winners typically go on to win the Oscar in other categories.

The Los Angeles Film Critics previously voted a Career Achievement Award to actor Max Von Sydow. All the awards will be handed out at the LAFCA’s annual awards dinner on Sunday, January 12, 2017.