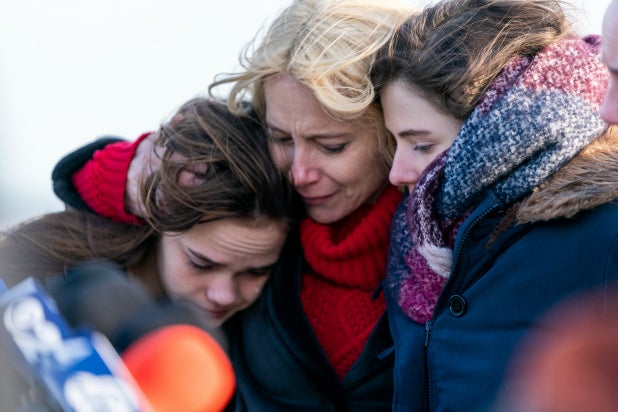 Unsated curiosity after watching a dramatization of real-life events — that rush to Google names, faces and dates — is quite frequently a validation of the importance or intrigue of a subject. But a movie like “Lost Girls,” about the victims of the never-found Long Island serial killer, highlights the possibility that some stories inspire questions because they aren’t especially well told.

Award-winning filmmaker Liz Garbus (“The Fourth Estate”) vividly captures the outrage and desperation of a mother seeking answers from indifferent authorities after her daughter disappears. Still, it’s hard to know if Garbus’ overwrought portrayal of these crimes and their aftermath depicts the actual investigation fairly, or if the former documentarian sacrificed accuracy for what proves to be short-term emotional effect.

The local police are slow to respond to Mari’s inquiries, especially after learning that Shannan was working as a prostitute. A handful of promising clues points to suspects in a nearby gated community as a random K-9 unit inadvertently discovers the bodies of four murdered women, none of them Shannan.

Meanwhile, Commissioner Doman (Gabriel Byrne) reluctantly takes on the case as his superiors instruct him to solve, or resolve, what quickly becomes a media circus. With Sherre and her youngest daughter Sarra (Oona Laurence, “The Beguiled”) in tow, Mari repeatedly hammers Doman and his detectives for details, discovering clues they ignored and connecting dots that raise red flags about a local doctor, Peter Hackett (Reed Birney, “Titans”), whom she is certain contacted her on the morning after Shannan’s abduction.

Wielding the media like a weapon to keep the authorities working on the case, Mari becomes a mouthpiece for her family and those of other possible victims, even as she is forced to confront the growing likelihood that she will not see Shannan alive again.

See Photos: Finished 'The Trials of Gabriel Fernandez'? Here Are 14 Other True-Crime Docs You Should Watch

So many of the personal details of these real-life individuals resemble screenwriting tropes that it’s hard to know what’s true and what isn’t; as unimaginable (and indeed, knowing the fates of members of Gilbert’s family and those of other victims, impossible) as it might have been to accomplish, a portrait of the investigation of the Long Island serial killer might have been better-served as an actual documentary. But as skilled as Ryan is conjuring portraits of hardscrabble matriarchs, the script by Michael Werwie (“Extremely Wicked, Shockingly Evil and Vile,”) either by accident or design, reduces Mari Gilbert’s complexities to a familiar laundry list of low-income clichés. She juggles too much, pays attention too little, rationalizes too frequently, and stops to listen too seldom — at least, until Shannan’s disappearance brings her gruff instincts into sharp focus.

Similarly, Doman’s career ignominy, underscored by a crime-scene call where unseen superiors threaten him with preemptive “retirement” unless the case is handled swiftly, catalyzes an eventual epiphany that prompts him to, you know, do his job. Stuff like that, along with characters like Lola Kirke’s Kim, a sex worker reckoning with her culpability in her sister’s disappearance, provides a few too many neat emotional payoffs in a case where there still aren’t enough concrete answers.

What immediately resonates is both the media’s treatment of the victims, and Gilbert’s strategic use of it to embarrass the police into action. Characterized as hookers and drug addicts, the young women became complicit in their own murders, cautionary tales of bad choices leading to bad consequences.

If the timeline of the investigation and the developments pushing it forward are to be believed, the authorities were woefully inadequate, even negligent in seeking information from the members of the community where so many bodies were found, much less from individuals who were credible suspects. Gilbert fought to keep her daughter’s face in front of cameras, to make sure that her story was told, effectively shaming the police from ignoring deaths they considered unimportant.

Mackenzie is effective if under-utilized as Sherre, who primarily serves as a mouthpiece verbalizing Mari’s internal guilt for abandoning Shannan, and the explanations that necessitated her choice. Byrne is exceptionally adept at capturing the juxtaposition of outward stoicism and internal conflict, but here he feels more like a stand-in for what one presumes is a line of investigators who resisted putting real time and resources into a heinous crime and community scandal. As Kim, meanwhile, Kirke gives Ryan’s Mari a surrogate daughter to say a few of the things she never did to Shannan.

Garbus’ barren, unfriendly backdrop for Mari’s pursuit of justice suits the indifference of the bureaucracy that the real Gilbert faced, but it also feels telegraphed — a landscape that’s accurately geographic and underwhelmingly metaphorical. The moments the movie comes together are during the interstitial montages of news footage, likely real, that eliminate the theatrical turmoil of the characters and focus on steps forward in the case.

Ultimately, Garbus successfully charts Mari Gilbert’s determination, investigators’ disinterest, and the droning uncertainty of a search where the resolution may prove more painful than the journey. But “Lost Girls” is a story that works much better if you do a Google search before watching it, not after, since it offers a lot of convenient human truths, but not enough hard facts.