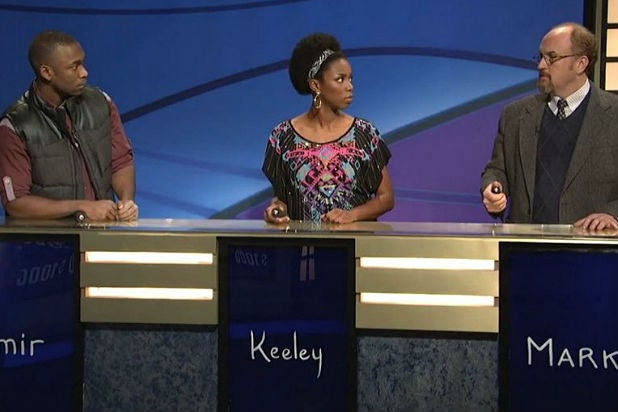 Louis CK has no problem playing up his strengths.

The second-time “Saturday Night Live” host drew big laughs with an eight-minute barrage of jokes on everything from God and heaven to domestic abuse and hunger during the show’s opening monologue.

“I don’t have third-world hunger. I have first-world hunger,” CK explained with signature drollness. “I would like a doughnut.”

CK kept the laughs and the momentum going when he appeared in a brilliantly irreverent sketch called “Black Jeopardy.” The 46-year-old former Chris Rock collaborator is the king of playing culturally ignorant but well-intentioned characters. That’s exactly what he did as Mark, a professor of African-American history and the sole white contestant.

It was funny on a number of levels  (including the fact that the sketch had to utilize all three of “SNL’s” black cast members).  One of the best punch lines was Mark’s inability to get any of the answers right until he aced one from the category called “White People.”

Unfortunately for viewers, “Black Jeopardy” and CK’s monologue were the best parts of the show. There were a few sparks of comedic brilliance here and there — in a short called “Dyke & Fats” with cast members Kate McKinnon and Aidy Bryant as exploitation-era lady cops, another short mocking the cheapness of Jos A. Bank suits and a “Mr. Big Stuff” musical number. And “Weekend Update” made it abundantly clear that anchors Colin Jost and Cecily Strong have found their comedic groove.

But the night’s closer, featuring an eccentrically insane man trying to win back his ex-girlfriend, was very light on laughs. Even that bit was better than the CK-free cold open, which parodied Obamacare and the lengths the president will go to online to get people enrolled.

The opener was the biggest dud of the night despite always impressive impersonations of Obama, Justin Bieber and Kim Kardashian from Jay Pharoah, McKinnon and Nasim Pedrad, respectively.

What did you think of  CK’s second time on “Saturday Night Live”? Tell us in the comments below.

Sam Smith: “Stay With Me”

Sam Smith: “Lay Me Down”