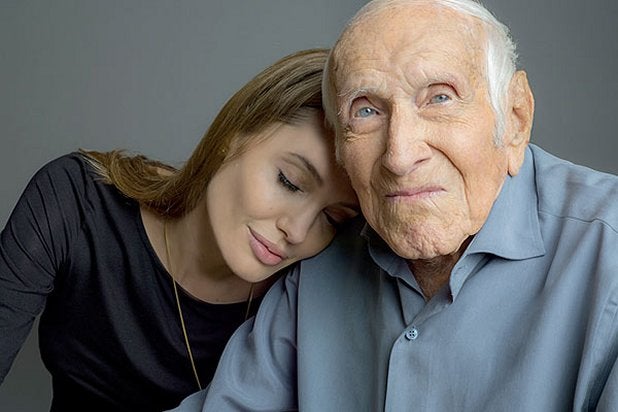 Louis Zamperini, a World War II prisoner of war survivor and former Olympic distance runner, has died. He was the subject of Lauren Hillenbrand’s book, “Unbroken,” which was adapted into a film written by the Coen brothers and directed by Angelina Jolie. He was 97.

“Having overcome insurmountable odds at every turn in his life, Olympic runner and World War II hero Louis Zamperini has never broken down from a challenge,” Zamperini’s family said in a statement. “He recently faced the greatest challenge of his life with a life-threatening case of pneumonia. After a 40-day long battle for his life, he peacefully passed away in the presence of his entire family, leaving behind a legacy that has touched so many lives. His indomitable courage and fighting spirit were never more apparent than in these last days.”

In 1998, Zamperini ran a leg in the Olympic Torch relay for the Winter Olympics in Japan, where he had been a prisoner of war during World War II. In 2011, he received honorary degrees for Doctor of Humane Letters from both Azusa Pacific University and Bryant University. That same year, he received the Kappa Sigma Golden Heart Award. Zamperini was scheduled to be the grand marshal of the 2015 Rose Parade in Pasadena, California.

Hillenbrand’s book, “Unbroken: A World War II Story of Survival, Resilience, and Redemption,” was a 2010 biography of Zamperini’s extraordinary life. It was a #1 New York Times bestseller, as well as being named Time Magazine’s best nonfiction book of the year.

Joel and Ethan Coen adapted Hillenbrand’s book into a feature film, with Richard LaGravenese and William Nicholson, with Angelina Jolie attached as director. “It is a loss impossible to describe,” Jolie said in a statement. “We are all so grateful for how enriched our lives are for having known him. We will miss him terribly.”

See video: Angelina Jolie Says She Pitched Her ‘Butt Off’ to Sell ‘Unbroken’ to Movie Execs

Zamperini was born in Olean, New York. He moved with his family to Southern California when he was a toddler, and went on to become a track star at Torrance High School. He set a record for the mile in 1934 on his way to a scholarship to the University of Southern California. Torrance High School named its football, soccer and track stadium after Zamperini, and in 2004, USC named the entrance plaza at its track & field stadium for him as well.

At 19, Zamperini became the youngest-ever American Olympic qualifier for for the 5,000 meters. He placed eighth in the event at the 1936 Olympics in Berlin, Germany, but his final lap of 56 seconds earned him the notice of Adolf Hitler, as well as a one-on-one meeting.

In 1941, Zamperini enlisted in the U.S. Army Air Forces and survived a plane crash in the Pacific theater, spending 74 days on a raft before finally reaching land, where he and his fellow survivor were immediately captured by the Japanese Navy. He spent the next two and a half years as an unofficial prisoner of war, while he was declared killed in action by the United States.

Zamperini wrote two different memoirs about his experiences before Hillenbrand’s biography. Both were called “Devil at My Heels,” but the 2003 edition was much expanded from the original, which was published in 1956.

“He lived the most remarkable life, not because of the many unbelievable incidents that marked his near century’s worth of years, but because of the spirit with which he faced every one of them,” Universal Pictures said in a statement. “Confronting challenges that would cause most of us to surrender, Louie always persevered and always prevailed, and he spent the better part of his lifetime sharing the message that you could do the same. His example of grace, dignity and resilience inspired all of us lucky enough to know him and the millions who got to know him from the pages of Laura’s book.

“We move forward to the release of “Unbroken” with a renewed sense of responsibility in bringing Louie’s abundant life and indomitable spirit to the screen.  Now more than ever, we join Angelina in honoring the lessons and legacy of this extraordinary man who has meant so much to so many.”

Jack O’Connell portrays Zamperini in the Legendary Pictures film, which Universal Pictures will release to theaters on Christmas Day.

Correction: An earlier version of this story did not accurately state where he grew up. TheWrap regrets the error.