When Lin-Manuel Miranda stood onstage at the 2016 Tony Awards and proclaimed “love is love is love …” as a poetic tribute to the victims of the Pulse nightclub shooting, he did so both as an invitation to and an acknowledgement of inclusivity. His words, so impactful in their simplicity, opened the door for anyone who didn’t yet realize the space was unlimited in its expanse.

Eleanor Coppola’s romance, “Love is Love is Love,” politely but firmly declines to enter that space. Indeed, it’s curious that Coppola chose such a meaningful phrase as the title of a film that would have felt old-fashioned half a century ago and that seems positively retrograde today.

The movie is composed of three disparate shorts meant to explore a range of connections. Instead, all three feel as if they were designed inside an echo chamber thematically, and none displays a desire to push the envelope creatively. 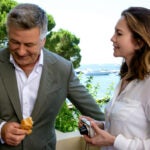 The first story, called “Two for Dinner,” is about Jack (Chris Messina) and Joanne (Joanne Whalley), a married couple on a dinner date. The big revelation, which is presented as though it were written by M. Night Shyamalan, is that they’re doing it via FaceTime. If this does not strike you as tremendously witty and unexpected, you can safely assume you are not the intended audience.

Jack is a producer stuck on a long movie shoot and Joanne is home alone, so they bring their laptops to their respective restaurants. Once the premise is established, there’s nothing to do but chat and eat. They don’t eat anything interesting — “The Trip,” this is not — and they have nothing exciting to chat about. Mostly, we hear how the kids are doing, how the shoot is going, and how much they still adore each other this far into their deeply loving marriage. The actual twist, blithely presented as a funny coda, marks the start of unquestioned double standards that serve as a sour thru-line between the films.

“Sailing Lesson” begins with Diana (Kathy Baker), another affluent, midlife woman getting ready for a day with a friend. When her husband (Marshall Bell) calls, he complains that he’s thinking about finding a girlfriend, because his wife is too busy with her own life and interests. He wants someone who can prioritize him and his boat, not herself and her book club. So she cancels her plans, makes his favorite foods, and spends the day sailing with him instead. 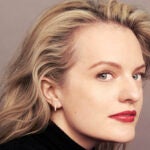 As Diana says to her disappointed friend (Polly Draper), if you don’t sacrifice your desires for your man, you wind up alone. There’s no twist to this one, it’s just time on a boat with one spouse who is deeply unpleasant, and another who appears to be suffering from Stockholm Syndrome.

The third story, “Late Lunch,” begins with a slightly more interesting premise. Maya Kazan (“Mosaic”) is Caroline, a young woman who has gathered her late mother’s friends at a luncheon to reminisce. The strongest element of this story is the cast, which includes Rosanna Arquette, Rita Wilson, Cybill Shepherd, Valarie Pettiford, Draper, and Whalley. Each of these pros is able to make the most of her screen time with a briefly commanding presence.

But they have no say over the script (by Coppola and Karen Leigh Hopkins), so they’re stuck with flat anecdotes about spouses and children and careers. By the time the women start choosing their favorite scarves from Caroline’s mother’s collection, we’re wondering, as we might at a painfully extended social obligation, whether we can unobtrusively duck out.

Coppola’s last big-screen romance, 2016’s “Paris Can Wait,” betrayed a similarly blinkered perspective. But she’s best known as the Emmy-winning director of 1991’s iconic documentary “Hearts of Darkness,” in which she chronicled the offscreen travails of “Apocalypse Now,” made by her husband, Francis Ford Coppola. She is 85 now, and claims the late Agnès Varda, who made her last film at 89, as a personal inspiration. Certainly, Varda’s acclaimed final works proved that age is no limitation on the vitality and impact of an artist’s vision. In fact, Coppola’s greatest accomplishment here is in gathering so many talented — and underappreciated — women over 60.

She does also show a sharp eye for small details. The way the women at lunch politely and collectively share enthusiasms and confessions, for example, rings true to highly gendered social rituals. But like dreams, the further one gets from the experience, the less interesting the retelling becomes.

That being the case, the closer a viewer is to Coppola’s subjects — nearly all of whom are straight, white, upper-middle-class, and late middle-aged — the more the movie may hit home. Without that warm jolt of recognition, there’s very little here to compel most viewers.

In the “Late Lunch” segment, cinematographer Hiro Narita (“La Mission”) and art director Barbara Munch do their best to replicate the warmth of a Nancy Meyers rom-com, but the overwhelming feeling is one of disappointment. Though the film’s tagline is “Love takes many forms,” there is little diversity in these three worlds. Indeed, what they have in common above all is a very limited vision of life and love alike.

“Love Is Love Is Love” opens Friday in U.S. theaters and on-demand Dec. 14.