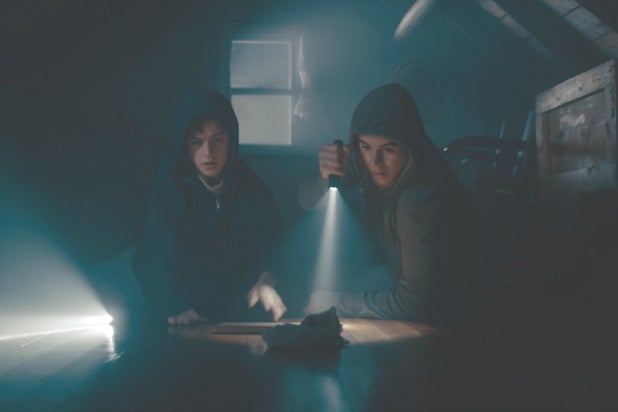 First-time filmmaker Kevin McMullin drew on his own background to tell a Jersey Shore story in “Low Tide,” and the personal connection shows. His coming-of-age tale doesn’t break new ground, but it does set the stage for continued potential.

McMullin was heavily inspired by both the setting and stories of his childhood, and convincingly blends the mix of menace and adventure found in films like “The Goonies” and “Stand by Me.”

He’s set his own movie somewhere around the mid-1980s, near Point Pleasant, New Jersey. It’s summer, and we can see immediately the clash between the suspicious “townies” and the vacationing “Bennies.” Most resentful among the locals is Red (Alex Neustaedter, “AXL”), who is both a few years older and a whole lot angrier than the teens he leads in undercover acts of class warfare.

Red, Alan (Keean Johnson, “Alita: Battle Angel”) and Smitty (Daniel Zolghadri, “Eighth Grade”) spend their nights breaking into summer homes and collecting whatever loot they can grab. But Alan starts having second thoughts once Red encourages him to bring his tween brother Peter (Jaeden Martell) along. (Martell previously starred in such films as “It” and “The Book of Henry” as Jaeden Lieberher.)

The perfect opportunity arrives when the guys hit one last house, and Alan finds a bag of antique gold coins. He tries to keep this discovery a secret, enlisting Peter to help him bury the stash on a nearby island. Their plan is to slowly sell the coins off, which would make them rich beyond their dreams and change their lives unimaginably.

But, of course, nothing is that easy. Fate seems determined to decree that the boys were born to be townies, and that’s what they will remain. One obstacle after another complicates their fantasy, until it threatens to become a nightmare.

McMullin’s feel for the setting greatly enhances the story, as does evocative camerawork from Andrew Ellmaker, making his own impressive feature debut. But McMullin’s inexperience as both a writer and director does sometimes hold him back. We can see too much of his plotting laid out, as clearly as if he’d handed us a treasure map with an X at the center.

Some of the supporting characters also suffer from a noticeable lack of depth. Froseth gives her character as much soulfulness as she can, but there’s no escaping the feeling that Mary exists solely to reflect Alan’s experiences.

But the younger actors bring surprising dimensions to what should be overly-familiar roles. We understand Alan’s unmodulated mix of brash confidence and inexperienced confusion, even — especially — when he makes clearly terrible choices. We relate to Peter’s frustrations, as a smart and serious-minded kid who isn’t yet bogged down in adolescent madness.

Most interesting of all is Zolghadri, who really digs into Smitty’s complicated weirdness. From one direction, we see an innocent and intelligent kid in desperate need of guidance. From another, he’s already a dangerous lost cause. That we never land on either, and leave the movie wondering which direction he’ll take, speaks highly of both Zolghadri and his up-and-coming director.