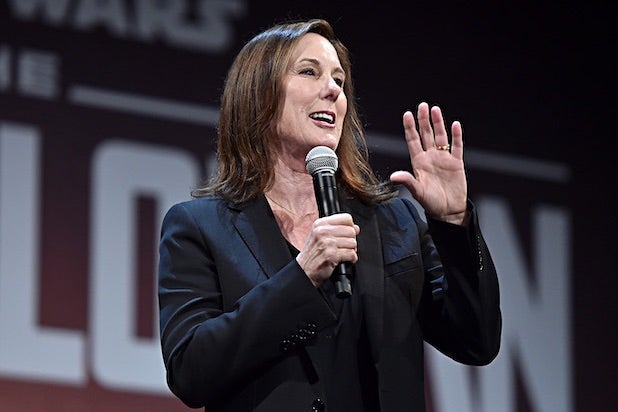 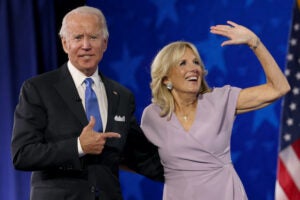 Lucasfilm President Kathleen Kennedy on Baby Yoda, ‘The Mandalorian’ and the Future of ‘Star Wars’

TheWrap Emmy magazine: ”There was an opportunity to create a workflow that’s different than what has essentially existed for the last hundred years,“ ”Mandalorian“ executive producer says

A story about “The Mandalorian” drawn from this interview with Kathleen Kennedy first appeared in the Emmy ot List issue of TheWrap’s Emmy magazine.

Kathleen Kennedy, the president of Lucasfilm and a winner of the Oscars’ Irving Thalberg Award, is nominated for an Emmy this year as one of the executive producers of the Disney+ series “The Mandalorian.”

The “Star Wars” spinoff series landed a surprising 15 nominations, putting it in the top five of all programs and making it the only first-year show to be nominated in the Outstanding Drama Series category. (No debuting programs were nominated for Outstanding Comedy Series.) We sat down with the veteran film executive to talk about the future of beloved sci-fi franchise — both on the big and the small screen.

Congratulations on all the Emmy nominations for “The Mandalorian.”
Thank you. That was a very nice surprise. I don’t think any of us anticipated that.

I have to admit that I expected it to get quite a few nominations, but I didn’t expect the drama-series nomination.
No, that was really nice to see. Really nice.

Also Read: Mark Hamill Had a Cameo in 'The Mandalorian' That Nobody Knew About

For years, there’s been talk about possible live-action “Star Wars” TV series. Why was this the first one that actually happened?
Well, there’s been no live-action work done in television by us until “Mandalorian.” But when (former Disney CEO) Bob Iger announced that he was moving forward with Disney+, the minute that he did that we jumped on it. And it really came about because I’ve known (“Mandalorian” creator) Jon Favreau and I’ve known of his interest in “Star Wars” for a long time. The thing that I think bonded Jon and I right away is we both had an interest and fascination in technology, and we’d been talking for a while about the fact that there was an opportunity to change things and create a workflow that’s different than what has essentially existed for the last hundred years.

Jon had come off “The Jungle Book” and was segueing into “The Lion King,” and he showed me what he was doing with the tech. It just seemed like a natural progression that when we got this opportunity to move into television, we might approach the show that way. It was a very exciting evolution of conversations that have been going on for a while.

Is the series using technology that hasn’t been used in the “Star Wars” world before?
Not entirely, because no technology comes out of nowhere. Obviously, there’s been a lot of work we were doing inside of ILM. All the visual-effects houses and the gaming world has been in ongoing discussions for the last decade, and there have been incremental steps going on in movies and in visual effects work for a while, most of all in gaming. Game engines is where always knew the convergence was going to happen that would allow for this. And Jon was using game-engine technology in the work that he was doing with “The Lion King.” So even though we ended up going with Epic (Games) and using their game engine, he was using a very similar technology. And prior to that, we had been doing some work with LED screens and with laser technology in “Rogue One” and “Solo.”

So it was really the combination of all of those efforts and discussions and talent. Frankly, people are always what drive this. I’ve always loved the approach to this kind of development — even going back to what Bob Zemeckis was doing (on 2009’s “A Christmas Carol”) and what James Cameron was doing (on 2009’s “Avatar”) when Steven (Spielberg) and I did “The Adventures of Tintin.” (2011) We were working near where Bob was working and where Jim was working, and everybody was visiting each other’s sets.

What’s been exciting about this evolution is that we were fortunate enough to walk into (former Disney streaming chief) Kevin Mayer’s office, John and I, and lay out what it was we wanted to do without necessarily knowing exactly how we were going to do it. And between Bob Iger and Kevin Mayer, they were willing to take a risk on us. Because we believed we could take this to the next step, they believed. So it was everybody joining hands and, frankly, jumping off the cliff together. And we were lucky enough to have it all work. 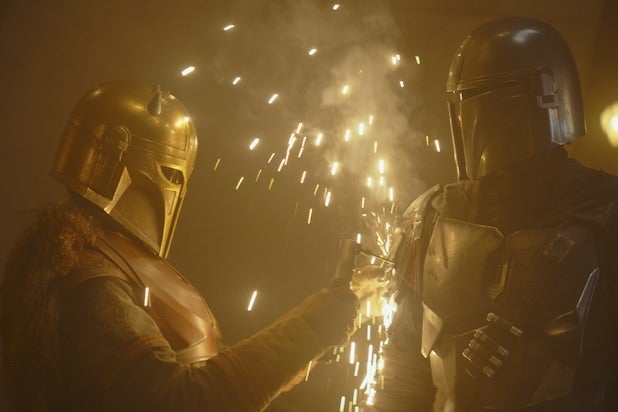 You can talk about the advanced technology, but one of the things that appealed to me about “The Mandalorian” is that it has the feel of the original trilogy or even the original “Star Wars” movie. However different the process was, it definitely feels like it’s from that universe.
I agree with you. It’s interesting, isn’t it, that the advanced technology is actually allowing you to feel that way. I think that that’s really true. I think that in an interesting way, it has all the DNA of what George (Lucas) was always interested in. He was trying so hard in pushing technology, but at the heart of it, it was still focused on storytelling and characters, and also a kind of lived-in feeling to everything. Which I think is something certainly (“The Mandalorian” director/executive producer) Dave Filoni understands in all the work that he’s been doing for years inside the company, and something Jon always loved. The technology has never been an attempt to try to move this further into some kind of science-fiction world. It’s still in service to that original feeling.

From a storytelling point of view, what were your priorities going into “The Mandalorian?”
Well, the most important decision made by Jon was the decision to focus on the Mandalorians inside the “Star Wars” mythology. The fact that they are in this metal armor meant we didn’t have to deal with everyone being in human form. That was extremely important, because it gave us some flexibility and forgiveness, frankly, in what we were trying to do with the technology. So that was a really important decision, and an idea that Jon had right from the outset.

I was just talking to Jon yesterday, because we’re in a visual effects review, which we do every week going through shots. And I actually hadn’t realized that the movie “Paper Moon” was a big influence on Jon when he was thinking about this story. That is not necessarily a movie you would immediately go to, but the minute he said it, I was like, “Yeah, of course.”

With Baby Yoda as the Tatum O’Neal character? I wouldn’t have picked up on that, either. You must’ve had an inkling that Baby Yoda, or “The Child,” or whatever you were going to call him, was going to be a real attraction.
Well, we did because all of us were attracted to the character as he evolved. And we knew when he was on the set from how everybody was reacting that he would certainly be a popular character. But I don’t think anybody quite anticipated the degree to which he would catch on. That, I have to say, was a bit of a surprise.

We knew enough to keep him secret. (Laughs) But we keep a lot of things secret on “Star Wars.”

At the end of last year, when “The Rise of Skywalker” came out, you said you wanted to take time out to think about where the franchise is going from there. Are you still doing that?
Oh yeah. It’s an ever-evolving process. You know, when I personally came into this, George had already been having conversations with his previous actors, Carrie (Fisher) and Harrison (Ford) and Mark (Hamill) — there was a saga that the fans loved and he never finished. He always talked about doing nine movies and he was ready to complete that. And so our focus had been from the beginning on finishing that saga.

And now we’re stepping back. Stories have been told within this universe over the last 40-odd years, and there’s now the realization that this is a mythology that actually spans about 25,000 years, when you really start to look at all the different stories that have been told, whether it’s in books and games.

We just need the time to step back and really absorb what George has created, and then start to think about where things might go. That’s what we’ve been doing, and we’ve been having a great deal of fun doing it, and meeting with lots of different filmmakers and talent. There’s so many fans out there and so many filmmakers that have been influenced by “Star Wars” for so long that it’s a fantastic opportunity to get a sense of who wants to be a part of this. So that’s what we’ve been doing.

Also Read: Why Did George Lucas Do the 'Star Wars' Prequels? Kathleen Kennedy Thinks She Knows the Answer

The lines between film and television are obviously blurring now, but do you think that television is very important to the future of the franchise?
I do. And I’ve already seen evidence of it. The ability to be very character-driven, with extended storytelling and connected storytelling, I think this space offers us a great opportunity to do that.

There are a record number of women directors nominated for Emmys this year, and three of your eight episodes were directed by women. Is that a priority for you?
It’s absolutely a priority. It’s been very exciting to see the talent that’s come in. And we’re now developing the limited Obi-Wan Kenobi series with Deborah Chow, and she’s just been doing a phenomenal job.

I was actually sad because I love Nia DaCosta, who was just announced to do “Captain Marvel” (the sequel). She’s another director I’ve been watching, and I think she’s enormously talented. Certainly, the kind of television that’s being made now is going to give many people an opportunity to direct more and be more involved with shows that have special effects and extended production values. It really gives people an opportunity to move into big technical movies. That’s exciting. I think we can develop a lot of new talent and it’s about time.

You finished the second season of “The Mandalorian” right under the wire before the shutdown, right?
Under the wire? It was literally five days and the country went down. We were enormously lucky, and then we didn’t wait (to finish postproduction). Even though we wondered to what extent people could work remotely, our IT department and ILM had everybody up and running within a week, working from home and continuing to work in the cutting room and on visual effects shots. It was pretty staggering how quickly they got everybody up and running. So we haven’t really lost any time. 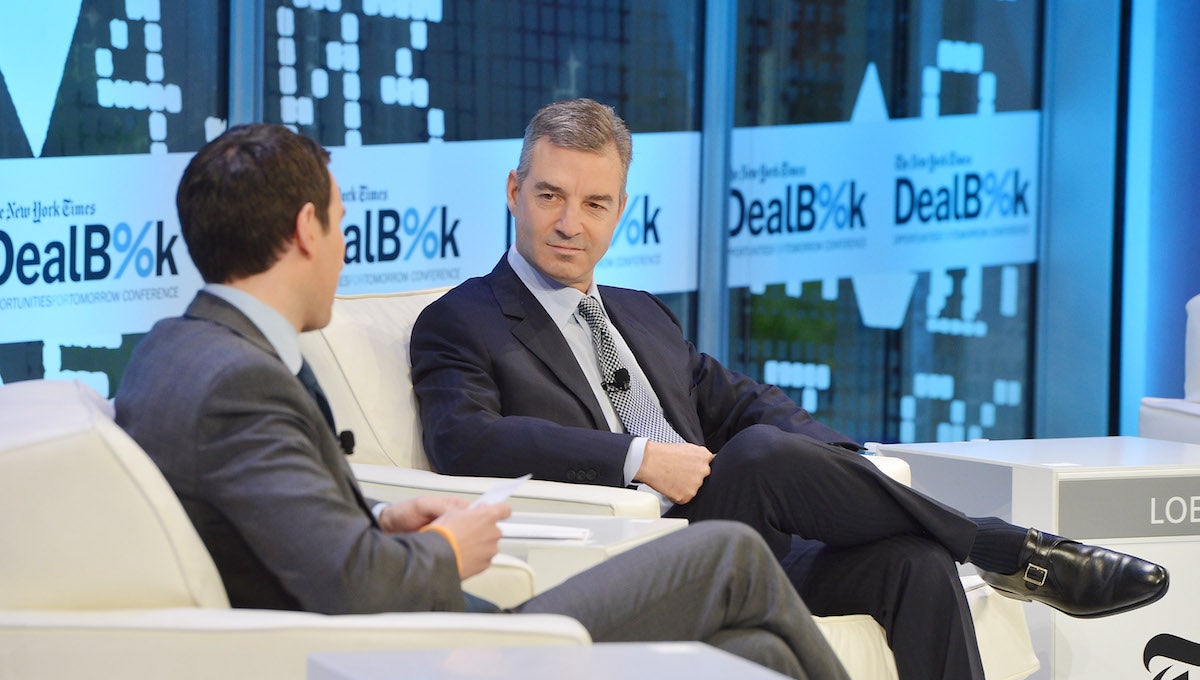