Lucy Lawless cemented her place as one of TV’s most iconic action stars with her six-season run as the star of “Xena: Warrior Princess,” but the actress says she’s glad to leave that part of her career in the past.

“Oh yes, I always hated action,” Lawless said during a Television Critics Association panel to promote her Acorn TV series “My Life Is Murder.” The actress said she “couldn’t believe” that action and fantasy became such a defining part of her early career: “I don’t do fantasy, I don’t watch fantasy, I’m not interested in any of this stuff, [but] I found myself in this crazy genre.”

Lawless starred in the title role of “Xena: Warrior Princess” for six seasons between 1995 and 2001. In the wake of the show’s success, she went on to appear in a number of other hit genre television shows, including “Battlestar Galactica” and Starz’s “Spartacus: Blood and Sand.” 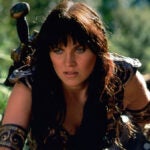 “My Life Is Murder,” on the other hand, is a “Murder, She Wrote”-style detective series that goes light on action. “That’s not part of our agreement with the audience,” Lawless said.

But there is one thing “Murder” does have in common with “Xena.” According to Lawless, the on- and off-screen connection she shares with her “Murder” co-star Ebony Vagulans is not unlike her dynamic with Renee O’Connor on “Xena.”

“I actually need her, as an actress as a human being,” Lawless said of Vagulans. “I feel much better when she’s around … It’s just a beautiful organic pairing, much like Renee in ‘Xena’ days, the magic is in the duo.”