When it comes to body-swap stories, there’s always the typical hurdles — figuring out what to do at work, how to avoid friends and family, etc. — but the biggest one tends to be the matter of the love interest, who often falls for the younger person in the older person’s body. This holds true in “Mack & Rita,” but you know what? Diane Keaton loved getting to kiss that love interest.

Here’s how it goes down. During her best friend’s bachelorette weekend, 30-year-old Mack (Elizabeth Lail) finds herself exhausted by the partying. She’s always considered herself an old woman, and having to act like she enjoys the shenanigans of typical 30-year-olds is becoming cumbersome. So, when she finds herself in a “past life regression” pop-up tent, Mack has a bit of meltdown, claiming that her true self is a 70-year-old woman.

And just like that, poof, she’s transformed into Rita, a 70-year-old woman played by Diane Keaton. From there, she goes through the typical struggles of a body-swap movie — including when her handsome next door neighbor, played by Dustin Milligan, falls for “Rita.” And yes, the two do share a kiss. It was actually Keaton’s favorite scene.

“Oh you’re gonna really think I — this is terrible. But I enjoyed the kiss. Don’t tell anyone!” Keaton told TheWrap with a laugh. “I didn’t say it, I didn’t say it. But I did!” 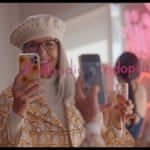 Of course, getting to kiss Milligan wasn’t the only high point of the film for Keaton. In reality, it was just that she got to have a good time — like when her character needed to be high on shrooms and talking to a dog named cheese.

“It was a lot of fun. And we were all kind of loose and OK, and we tried things out,” Keaton explained. “And not all of it was perfect. Or, forget perfection, but not all of it was — you know, it was just really, really a happy group of people, and a great director, and great writers. And it just was fun. It was just like, ‘OK, let’s just do it! Don’t make too much out of it!’ You know that a lot of that comes up. And like it’s so important. It’s not so important, you know?”

That “great director” is Katie Aselton, who makes her directorial debut with “Mack & Rita.” And, as a seasoned veteran at this point, Keaton made a point to note just how great Aselton was, especially as a first-timer.

“It was not difficult. It was really one of those better experiences you have, because she was on top of it already,” Keaton said. “But she also was very open to all of us to, you know, make sure that we were all feeling good about it and managing. She was just uniquely great. Uniquely great.”

You can watch TheWrap’s full interview with Diane Keaton in the video above. “Mack & Rita” is now in theaters. 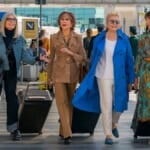