“Furiosa,” the “Mad Max: Fury Road” prequel film that George Miller is writing and directing, has been bumped back by nearly a year and is now dated for a summer 2024 release.

“Furiosa” stars Anya Taylor-Joy as a young Furiosa, the role popularized by Charlize Theron in “Fury Road,” as well as Chris Hemsworth and Yahya Abdul-Mateen II. The film will now open in theaters on May 24, 2024, pushed back from June 23, 2023. The film is co-financed by Warner Bros. and Village Roadshow Pictures.

Warner Bros. has also set a date for the New Line film “Salem’s Lot,” a horror film based on a Stephen King story, which Gary Dauberman is directing and James Wan is producing. That movie stars Alfre Woodard and will open in theaters on Sept. 9, 2022.

“Furiosa” is still set in the dystopian, desert wasteland Miller created as far back as the original “Mad Max” trilogy with Mel Gibson. Miller had previously been eyeing Taylor-Joy for the role, among other actresses, and had conceived of a backstory for Furiosa as he was writing “Fury Road.” He even incorporated elements of her story into a separate screenplay for “Fury Road” from 2015.

Filming on “Furiosa” is expected to begin in Australia later this year, though the country has been locked down because of rising COVID rates. In August, filming on another Chris Hemsworth movie, Netflix’s “Extraction 2,” was moved out of Australia and into Prague so that he could keep on schedule.

As for “Salem’s Lot,” King wrote the novel on which the film is based in 1975. It follows a writer who returns to the town of Jerusalem’s Lot, where he lived as a young boy, only to discover everyone he used to know is now a vampire. It was only King’s second book to be published at the time, and was his first book to top the New York Times Bestseller list. In 1979, Tobe Hooper directed a “Salem’s Lot” TV movie, and a miniseries based on the book was released in 2004. 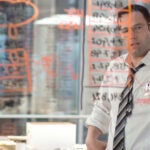