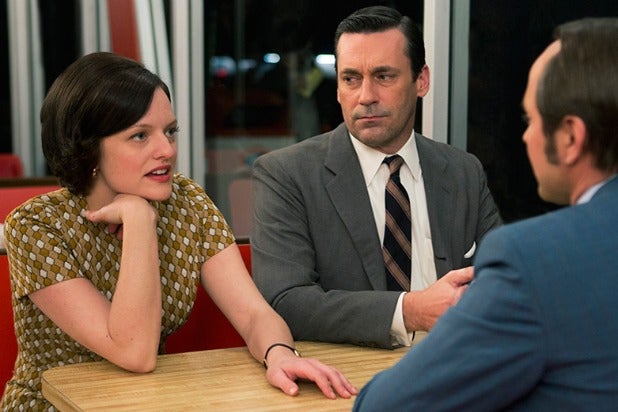 The “Mad Men” midseason finale was all about vision: Roger Sterling proved he had one for the company. Don Draper had one of Bert Cooper. And Matthew Weiner showed that his won’t be limited by anything.

Heading into the show’s final seven episodes next year, Weiner signaled that no limits remain on his story. If they can put a man on the moon, why not let the year end with Don watching a singing, dancing, altogether charming Bert serenading him with the perhaps ominous observation that “the best things in life are free”?

Also read: Matthew Weiner to Stephen Colbert: Boomers Have a ‘Child’s View’ of the ’60s (Video)

The show’s final scene will be the one that has everyone talking, arguing, and YouTubing Robert Morse’s musical numbers in “How to Succeed in Business Without Really Trying.” When Weiner decided to kill of Cooper, he must have known the lone consolation would be Morse’s lovely voice, performing Cooper’s goodbye song to Don.

It was a jaw-dropper, but less shocking the more you think about it: Both Don and Roger have had hallucinations on the show before. This just happened to be the first one to include delightful singing and choreography.

Also read: ‘Mad Men': A New Spin on the Carousel

But then Roger orchestrated a complicated deal to save Don’s job and make all of the partners millionaires, disproving Bert’s observation, in their final talk, that Roger wasn’t a visionary. It was easy to miss, amidst all the workplace maneuvering, that Don’s life with Megan appears to be over.

So where does “Mad Men” go now? Don has reinvented himself, yet again. His second marriage looks over, though at least he rejected the chance for yet another affair. In her moment of triumph, Peggy seems likely to be denied the spoils of Roger’s deal with McCann. And this feels like the umpteenth iteration of Sterling Cooper Whatever They’re Calling It Now.

The company’s changing fortunes, rotating lineup and ever-shifting ownership seem to be Weiner’s way of telling viewers: Don’t worry too much about the firm. None of the day-in, day-out pursuits mean very much, because this isn’t really a show about anything so small-minded as how to succeed in business.

Even the plotlines, which Weiner is self-consciously recycling, may be incidental to what he’s trying to do. He aims to show us, through Don, what it means to live through a crucial, turbulent time when nothing can be trusted to stay the same. Last week Peggy asked Don what could possibly worry him.

“That I never did anything and that I don’t have anyone,” he said, before a scene at Burger Chef (pictured) showing that his co-workers may be his real family.

Don has accomplished plenty, but the constant workplace upheaval shows that those accomplishments are built on sand. He’s made money, but the best things in life are free. And he can’t seem to hold onto them.

Sterling Cooper is a company so in transition that even the Cooper part remains in name only. Weiner isn’t all that concerned with partnerships, names on the door, or money.

He’s shooting for the moon.