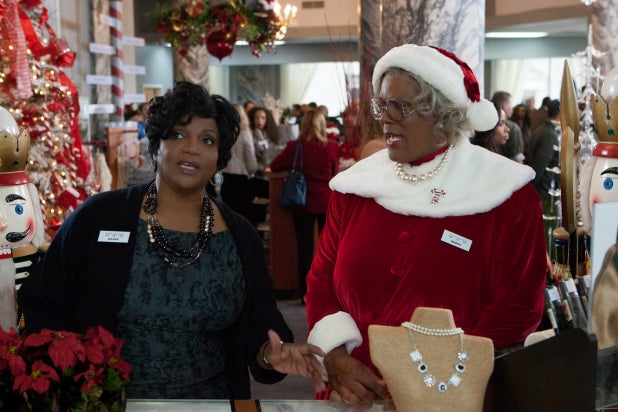 The trailers for “A Madea Christmas” promise the sight of the tough-talking, no-nonsense protagonist working as a shopping mall Mrs. Santa and shooting down the dreams of bratty kids. That never happens in the movie, alas, but the sight of Madea in a fake North Pole makes me want to share my own Christmas wish:

I want Madea to have her own “Duck Soup.”

Fans of the Marx Brothers fondly remember that 1933 comedy as the group’s finest and funniest, and one of the reasons it’s so great is because it’s the most unfiltered vehicle for Groucho, Harpo, Chico and Zeppo. There’s no ingénue, no love story, no non-comedic musical numbers, just 68 minutes of pure, anarchic brilliance.

Madea is no Groucho Marx, granted, but if writer-director Tyler Perry would just let this ribald, outrageous sassy grandma loose for 90 minutes, he’d have a comedy triumph on his hands. Instead, with “A Madea Christmas,” we get sporadic (but hearty) hilarity from Madea’s interactions with those around her, zippy moments that are weighed down by yet another sappy and melodramatic Perry screenplay.

See video: OWN Brings Tyler Perry’s and Oprah’s Winfrey’s Most Memorable Characters Together

Madea (Perry) takes a job in an Atlanta department store to earn extra Christmas cash, but her not-having-it attitude with customers quickly gets her fired. Friend and coworker Eileen (Anna Maria Horsford) recruits Madea to join her on a holiday trip to Alabama for a surprise visit to Eileen’s daughter Lacey (Tika Sumpter), since Lacey told pushy, meddling Eileen she’d be too busy to come home for Christmas.

Waiting for them in Alabama is a big bag of plot: Lacey has secretly married agri-scientist Conner (Eric Lively) but is too worried about Eileen’s fragile health to tell her that she married a white man. The small town where Lacey works as a teacher can’t afford to put on the annual Christmas Jubilee, until Lacey’s ex-boyfriend Oliver (JR Lemon) offers a sponsorship possibility that’s got more than one string attached. And Lacey’s got a sensitive, intelligent student (Noah Urrea) who’s being bullied by classmates and pushed around by his mean redneck daddy (Chad Michael Murray).

Also read: Hollywood Is Dreaming of a Black Christmas

Perry doesn’t seem any more interested in the story than his audience is, since all the problems get clumsily tied up in the last five minutes in ways that defy all logic. (Solution to bullying? Punch them in the face. Solution to evil corporations? Promise something on their behalf on a TV microphone, and they’ll be honor-bound to comply.)

But you can’t have “A Madea Christmas” without Madea, and she’s the reason to see the film. Perry seemed to be holding his nose and trudging through the disappointing “Madea’s Witness Protection,” but this time Madea has her groove back, and she’s a riot. Wisely, Perry has brought in Larry the Cable Guy — who’s basically the white male version of Madea — as a comic foil, and the two of them volley entertainingly, as does Kathy Najimy as Conner’s good-ol’-gal mom. The three of them are clearly improvising like mad, and visibly having a great time doing so.

Also read: Tyler Perry’s ‘For Better or Worse’ Premiere Gives OWN its Best Wednesday Ever

Perry seemingly fears losing the core audience of church ladies who originally put him on the map, but he’s not serving them well by throwing them these warmed-over homilies. (There’s a subplot about the town being forced to take all references to Jesus out of the Christmas play, but the script winds up ignoring this bump in the road rather than resolving it.)

If he had just given us Madea unleashed on shoppers, Madea substitute-teaching and then Madea shticking it up with Najimy and Mr. The Cable Guy, his fans would give a much heartier “Amen” to “A Madea Christmas.”