TheWrap magazine: The veteran director isn’t sure, but he’d been listening to Jackson’s music every single day before he got the call to direct the Lifetime movie

This story about Kenny Leon and ‘Mahalia’ first appeared in the Limited Series & TV Movies issue of TheWrap’s awards magazine.

When the pandemic hit, the first thing Kenny Leon did was shut down the Tony-nominated Broadway revival of “A Soldier’s Play” starring David Allen Grier and Blair Underwood, which he’d been directing. He went back to his home in Atlanta, hunkered down and fell into a routine: He’d wake up in the morning, play the Mahalia Jackson music that had surrounded him as a child, pray for an hour, meditate and ride his Peloton bike.

And then, after seven weeks of that comforting schedule, he got a call from ABC newscaster Robin Roberts and Lifetime executive Tanya Lopez asking if he’d be interested in directing a movie about … Mahalia Jackson.

“I was like, ‘Do you have any idea that I’m waking up every day to Mahalia Jackson?’” he said, laughing about the women approaching him to direct “Robin Roberts Presents: Mahalia.” “And they were like, ‘No, we loved (Leon’s 2012 Lifetime adaptation of) ‘Steel Magnolias’ and we wanted to see if you were interested. I said, ‘Not only am I interested in it, I grew up with it and I’ve been dealing with it every day.’

“Tanya and Robin had no way of knowing that I grew up in the Macedonia Freewill Baptist Church in St. Petersburg, Florida, and that Mahalia was part of the house. I thought it was just divine inspiration.” 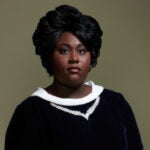 His first thought was that actress Danielle Brooks, with whom he’d worked on an all-Black stage production of Shakespeare’s “Much Ado About Nothing,” was the person to play Jackson, the ferociously powerful singer who helped bring gospel into the mainstream with songs like “Move On Up a Little Higher,” and who became a friend and confidante to Dr. Martin Luther King, Jr.

“She could sing, she has a powerful presence and she has humor,” he said. “And like me, she grew up in a spiritual family — her mother was a minister.”

Leon originally envisioned a large-scale film that would take Jackson to crowded concert halls and stages around the world — but with a starting date of October 2020, a firm airdate of Easter 2021 and a pandemic complicating every move they made, he scaled things down to make a more intimate film. 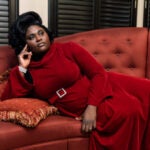 It still had rousing moments, none more dramatic than an audition where Mahalia delivers a transfixing version of the slavery-era spiritual “Sometimes I Feel Like a Motherless Child,” and the audience experiences her power for the first time. “That boils down to the greatness of Danielle,” Leon said. “We gave her the key and she knocked it out of the park right there. I turned around and the cameraman was crying, the focus puller was crying, the other actors around the room were crying.”

But quieter scenes were just as crucial to Mahalia, including one in which Jackson sits on a couch with Dr. King, their gentle dialogue undercut by the civil rights icon’s own intimations of mortality. “In that scene, I did something I’d never done before,” he said. “I picked up a Bible that was there as a prop. And when the two actors came in, I read the whole book of Genesis to them. I didn’t plan on it, I wasn’t trying to manipulate them, but I read it. And I guess the actors found that what was true in Genesis was also true in the moment they were in.

“It was a scene about two people of faith trying to deal with their weakness in a certain moment, so I read the Bible, and then I got up and said, ‘Action.’ They wiped away their tears, and the scene came out of that moment.”