Cable customers are tired of big bills and want the ability to pick and choose the channels they subscribe to, a new study by PricewaterhouseCoopers finds.

Seventy three percent of the more than  1,000 people the firm surveyed about their video consumption habits said they would like an a la carte option or want the ability to customize their cable packages instead of being limited to a few, wide-ranging bundles. 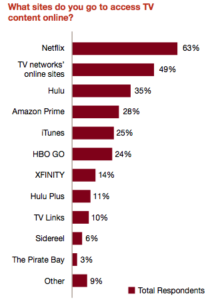 Given that flexibility, 65 percent say they would be willing to pay for access to more than 10 channels. However,  demographics play a role here. Seventy three percent of older viewers, aged 50 to 59, want 10 or more channels, while only  55 percent of younger viewers, aged 18 to 24, want  hat many channels.

The findings come as Arizona Sen. John McCain has generated headlines with a proposal to give cable customers the freedom to only subscribe to the channels they watch.

Cable companies are reluctant to shake things up. Under the current model, media giants enjoy multiple revenue streams, including advertising and carriage fees from cable companies. To maximize profits, companies like Disney bundle less viewed channels like ABC Family with more popular ones like ESPN.

Yet, the cost of cable continues to rise, with some studies indicating that the average package will top out at more than $200 a month by 2020.

At the same time, streaming services like Netflix and Hulu are giving viewers more ways to view shows and movies than ever before.

When it comes to these new entertainment options, Netflix is far and away the most popular online destination for TV content. Sixty three percent of respondents use the service, while 35 percent use Hulu and 28 percent rely on Amazon Prime.