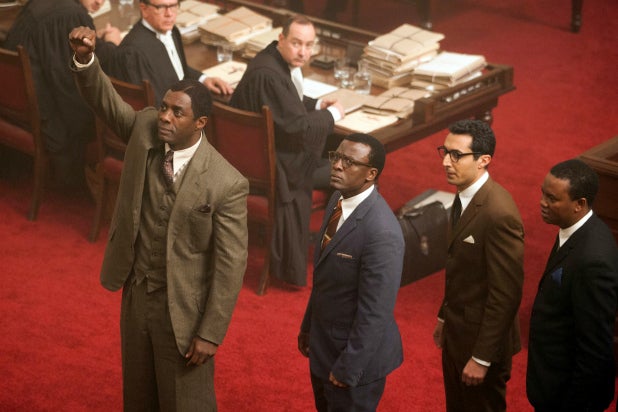 In 1989, a banner year for crumbling totalitarianism, even the collapse of Soviet Communism was out-glammed by Nelson Mandela taking the reins of a South Africa he helped release from one of the most savagely racist regimes of the 20th century.

“Mandela: Long Walk to Freedom,” a slightly too stolid but nonetheless moving biopic based on the great man’s memoir, covers the momentous years leading up to that date. Part action movie, part courtroom and family drama, the film covers the ground from Mandela’s childhood, through his conversion to violent resistance after the 1960 Sharpeville massacre, and the 27-year sojourn in prison that turned him into an advocate of peace and reconciliation.

At 141 conscientious minutes, “Mandela” could use some pruning.  But the man and his times were epic, and director Justin Chadwick does his best not to dawdle or to position Mandela, a so many have, as a flawless candidate for sainthood.

Mandela is so frail these days that it’s easy to forget what a strapping fellow he was in his salad days. Six-feet-plus and oozing charisma, Idris Elba (“The Wire”) looks nothing like the man his followers called “Madiba.” But Elba restores Mandela’s physical presence and transforms him from a cocky, philandering young lawyer, convinced that he can claw his way up the social ladder on his own merits, to the eloquent orator who roused demoralized blacks in the townships to action. Finally, triumphing over some rather paralyzing aging prosthetics, Elba gives us Mandela the serene prisoner, befriending his jailers and biding his time.

Chadwick’s efforts to cover the waterfront can be a bit of a slog, and neither the history not the character study offer any surprises to those who keep up. But I’d rather see this soberly fair-minded film go into America’s schools than, say, Clint Eastwood‘s boosterish “Invictus,” which falls into the Great Man view of history trap we see so often in Hollywood political biopics.

“Mandela” makes it clear that one man could never have brought down apartheid alone or, for that matter, unchallenged from within. Far from dismissing the oppositional ANC party as a bunch of unreconstructed thugs, as Eastwood did, screenwriter William Nicholson is sensitive to the movement’s internal divisions.

Nor does Nicholson shortchange Mandela’s titanic gifts as a political player: That he was able to negotiate with his oppressors (the movie doesn’t gloss over the fact that apartheid offered a playground for thousands of natural-born sadists who upheld it) for a peaceful transition without allowing them to corral him for their own purposes was a brilliant stroke. Whether Mandela actually told the dumbfounded new leader F.W. de Klerk,  “I don’t want you at my side; just open the gate and let me walk out.” But it’s a thrill to witness the dignified serenity with which he takes charge.

Perhaps most crucially, “Mandela: Long Walk to Freedom” refuses to demonize Winnie Mandela (played by Naomie Harris, the fetchingly innovative Miss Moneypenny in “Skyfall”) or to sugarcoat her destructive incitements to violence, against both whites and her own people. In this persuasive telling, Winnie’s scant four-year marriage to young Nelson began as a true meeting of minds, bodies and spirit. The brutalizing 14-month incarceration that took Winnie away from the couple’s two young daughters might have turned anyone into the hater she became.

“Might” is surely the operative word here. For if the story of this passionate couple tells us anything, it is that oppression can either ennoble the victim — or it can create a monster.