The films of French director Quentin Dupieux spin self-contained worlds that revolve around absurd obsessions: an automobile tire with an urge to kill (“Rubber”), a man consumed with desire for a fringed leather jacket (“Deerskin”), and now, in the low-key, blank-stare silliness of “Mandibles,” two dimwitted dirtbags determined to train a shockingly large pet housefly to steal.

Tall, oafish, jorts-wearing Manu (Grégoire Ludig) and smaller, squirrely Jean-Gab (David Marsais) are affable idiots. Jean-Gab is happy to walk away, at a moment’s notice, from the small gas station he manages without locking up, while Manu is first seen sleeping on a beach, unaware he’s being soaked by the encroaching tide. They’re thirtysomething fools, a live-action Beavis and Butthead whose only constant is their lifelong friendship, one punctuated by inside jokes, private handshakes, and a recurring habit of getting stuck in the middle of a thought with a very French “duh” on their lips.

Unsuited to any occupation but small-time grift, yet lacking the good sense to see even minor crimes through to completion with anything resembling efficiency, the pair embark on a seemingly simple mission: Deliver a small briefcase containing an unidentified object from Person A to Person B. But then arrives the ultimate distraction — that giant housefly (an adorable buzzing puppet the size of an ottoman), which they name Dominique and decide to train for even bigger money, forgetting about their original task. 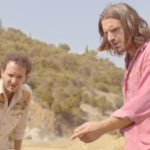 Along the way, a car is stolen, people are kidnapped and robbed, small camper vans are burned to ashes, and dozens of cans of cat food are consumed. When a young woman named Cecile (India Hair, “Call My Agent!”) mistakes Manu for a friend she remembers from high school, she invites the pair back to the summer home she’s sharing with other thirtysomethings. Among them is snotty brother Serge (Belgian rapper Roméo Elvis) and a friend named Agnès (Adèle Exarchopoulos, “Blue is The Warmest Color”), an expert chef with a brain injury that involuntarily causes her to shout every word she utters.

There’s a narrative tradition in French cinema of languorous, work-free summer as a setting for everything from adolescent yearning to intellectual romance to murder. In films as tonally diverse as Éric Rohmer’s “Pauline at the Beach” and “A Summer’s Tale,” Alain Guiraudie’s “Stranger by the Lake,” and Jacques Deray’s “La piscine,” the French holiday at the beach or, even more luxuriously, a summer home with staff preparing the lazy lunches, has been shorthand for the good life, an enveloping visual site of pleasure or fashionable perversity. “Mandibles” takes this tradition and gleefully farts all over it.

Also Read:
‘Rubber': The Film That Could Make Quentin Dupieux the Next Michel Gondry

This time, the summer film’s usual washed-out, sun-baked color palette and hazy atmosphere, provided by Dupieux’s own cinematography, in collaboration with his life partner, production designer–art director Joan Le Boru, is a trap. Every frame encourages letting one’s guard down, just so the story can roll into a ball of sloppy chaos and make an appropriately goofy mess.

Ludig and Marsais, after years of working together in France — they’re a sketch comedy team known for the series “Palmashow” —  are old pros at nonsense, and they display an easy, lived-in rapport as the film’s central pair of knuckleheads. But it’s Exarchopoulos who unnerves every time she shows up and creates the most lasting impact. She doesn’t simply yell her way through the otherwise low-stakes hum of every scene she steals; she inhabits a wild-eyed frenzy with each line and physical gesture in a performance that reads as homage to Madeline Kahn in “What’s Up, Doc?”

Terrible things — none revealed here — transpire and our Not Heroes stumble their way into making them happen, forgetting the past of recent moments, oblivious to future consequences, usually thinking of their next meal or egging each other on with the promise of future wealth if they can just get the enormous insect to do their bidding. In the real world, they’d be dangerous sociopaths; here they’re affectionately homosocial friend-spouses who ruin everything and everyone in their path in the pursuit of nothing more than real chill times. 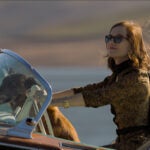 Recalibrating their crime-career expectations to smaller and smaller rewards as mishaps pile up, until even the sweet-natured, obedient monster bug is an afterthought, Manu and Jean-Gab spiral back down to where they started, going nowhere and doing nothing. For Dupieux, there seems to be no moral here at all, other than perhaps that life is a trajectory of mishaps and easiest for people who don’t linger over the fallout of their actions. This isn’t necessarily surprising for a filmmaker who once wrote and directed a movie about a sentient tire that commits serial murder.

But after reaching the end of this broken road trip, the dumb and dumber duo seem to have come to a gentle, mutual epiphany about friendship. It’s one that can be found in almost any Spice Girls song, but hard won by wannabe criminals with the mutual attention spans of a fly.

“Mandibles” opens in US theaters and on demand July 23.