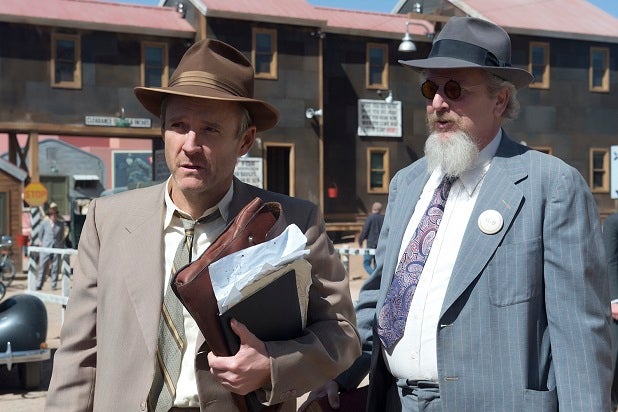 WGN America’s new drama “Manhattan” — premiering Sunday at 9 p.m. — takes a fictional look back at the birth of the atomic bomb during the top-secret Manhattan Project in Los Alamos, NM. In the process, the show takes a fictionalized look at the personal lives of the workers at Los Alamos as they raced to create a weapon that would alter the world forever.

TheWrap: What made the Manhattan Project an attractive topic for a television series?

Sam Shaw: For me, I wrote a first draft for the first episode of this show many years ago. It actually began as a very different show. The subject matter and themes were the same, but it was a very different  time and place. It was a contemporary piece about the war and terror and secrecy as it exists on a national level and in the present day. It was about what it is to be involved in secret work, and the toll that secrecy takes on families. For a whole variety of reasons, I wound up shelving that project, but I was really interested in writing about secrets and secrecy. What I discovered in the course of doing a lot of research is that the birth of the atomic bomb, the birth of America as a superpower was also really the birth of the military-industrial complex, the birth of the American security apparatus. It’s the birth of secrecy at a national level as it exists right now.

Schlamme: And the birth of suburbia.

Shaw: And that’s true, too. Amazingly, Los Alamos was the first modern planned community — the template for Levittown — and to me that was a really provocative thing. The atomic bomb, secrecy at a giant governmental level and the suburbs were triplets that were born in the same womb, this odd town in the desert. What it felt like to me was that it was a way to write about a lot contemporary issues, issues that we’re trying to figure out and grapple with right now, but to do it in a novel way.

See video: ‘Manhattan’ Extended Trailer Boasts as Much Sex as There Was Bomb Making

In the decades since the Manhattan Project, the big threat has shifted from nuclear war to terrorism. Do those things create a different kind of national fear, and if so is one of them more intense than the others?

Schlamme: No, I think in the same way that … unfortunately, I can remember the Cuban missile crisis when I was a little kid, and it was so frightening. What I really remember is my parents putting things in our pantry — extra stuff that they had heard that they needed. You know, it was scary. I have a feeling that my children — I have three children — felt the same way on September 11. I think this country went into a very similar [thing]; the after-effects of 9/11 weren’t much different than the feeling during the Cold War, and the fear of the bomb … I think after the war and today, we’re not in much different places.

Shaw: Yeah. It’s an interesting thing that I’ve been thinking about lately. There’s this great vogue right now for stories about the apocalypse. Like, Americans never met an apocalypse they didn’t like. Zombies, through visions of nuclear apocalypse — we are sort of addicted to this idea of replaying and rehearsing and watching our own destruction. To me, one aspect of this story that’s very fascinating is that this is the story of the first people to live in a world where humankind had the ability to destroy itself. What would that do to you to know that you are opening Pandora’s box and creating that kind of power? In a way, it’s the origin story of a kind of apocalyptic story that we’re fascinated by. This was a moment when the world felt like a very dangerous place, and I think that’s something that people feel right now in different ways.

In 1943, the top-secret government endeavor was the Manhattan Project. These days, we have the NSA. Is it disconcerting that, the more things change, the more they stay the same where the government is concerned?

Schlamme: Well, it’s both a little disconcerting and also incredibly uplifting, because we haven’t destroyed ourselves yet. We now have the ability for 60-something years to destroy ourselves, and it is a wonderful thing that we haven’t. It’s also a tragedy that we still build these weapons of mass destruction. That’s my own personal edification. That we still are capable of building them … That’s the other thing that doesn’t get discussed near enough, is how many warheads there still are. During the Cold War, we constantly kept track of them. It’s not everyday conversation any more.

Are the characters based on real people who were involved with the project? Was Frank Winter [played by John Benjamin Hickey], for instance, an actual researcher on the project, or were these characters made up out of whole cloth?

Shaw: The characters in our show are almost all fictional characters. There are one or two historical figures who wind their way through the season — Robert Oppenheimer appears in our first episode, and he’ll appear in more. The approach from the beginning was to create as carefully researched and textured and real backdrop as we could for fictional storytelling. For all we’ve been talking about the big political theme and history, really, this is a character drama, and it’s first and foremost a story about the inner lives of these men and women who are trying to make their way under unimaginable pressures, and pressures to their relationships, their marriages, et cetera. So from the beginning it was always part of the conception of the show to populate a real world with fictional characters. Now, the science and the history is accurate — there was a group working on an alternate model very much like the one that’s in our story. But Frank Winter is wholesale fiction. Now with that said, I’ve done a lot of research. I love research, it’s one of the great pleasures of writing.

The show does a good job of combining the bigger story about the bomb and the personal drama of the characters. Though it’s unsettling that people who were working on a project of this magnitude were driven by the same office politics and drama that you might find anywhere.

Schlamme: When you’re part of history, you don’t know it. You’re just sort of living your life. And if we step out with sort of this revisionist concept of, “Remember, guys, what you’re doing…”  What they’re doing is, “We’ve got 16 hours today to solve this problem. That’s what I need to do. Why are you fucking talking to me about lunch? I need to get lunch today, I haven’t eaten yet.” In other words, all those things  that still are operational to them. All day long, they’re not going, “My god, one day we’re going to drop this on Hiroshima and kill 250,000 people and change the world.” They’re just living their lives. And they didn’t get laid last night, or they’re not talking to their wife. All of those things are operational, and if you can blend the two, it feels very honest to me and very real. It also gives you the ability to have humor in your ego. Because we’re all pretty frail and weak as a species. And that’s what humanizes people who are working on such an important thing.

Shaw: For both of us, we were never interested in telling a story that was a docu-drama or a scientific history of building the bomb. It was more like, what was it like for everybody else in this place? What’s the human window into this story? The human window is, if you break the heel of your shoe on the day that Pearl Harbor happens and you’re late to pick up your kid and you get in a fight with them and your kid tells you he hates you, your story that day is about breaking the heel of your shoe and having a fight with your kid, not necessarily what happened to the U.S.S. Arizona.

The series reunites Thomas with “West Wing” alum Richard Schiff. Will he be a big presence through the season?

Schlamme: Well, we don’t want to give any spoiler alerts, but we’re still working with him right now [as they film the series finale].

Shaw: If you work with Richard Schiff and he’s as good as he is, you find a way to keep working with him.

Should the show go into multiple seasons, have you talked about whether the bombing of Hiroshima will be depicted?

Shaw: Absolutely. We always had a plan for what the life cycle of this show would be. It’s also the case that one great things about TV is that you have to be open to serendipity and change your plans as you go. What I will say is, this show isn’t the story of the end of World War II. It’s the story of the beginning of something, the beginning of a new era, and the story of the lives of these people only becomes more complicated and more interesting once all the secrets that they’ve been keeping are unleashed on the world and they reckon with the implications of this thing they’ve been involved with.