Before 1967, the Best Production Design Oscar was split in two, with separate awards for color films and black and white films. And in the 53 years since the Academy combined the category into one, only a single black and white film (1993’s “Schindler’s List”) has won the award.

That could very well change this year. David Fincher’s “Mank” is an elegant and silvery evocation of 1930s and 40s California, set around Hollywood and in the spectacular Hearst Castle, on the Central Coast. The sets are crucial to the movie’s impact, and production designer Donald Graham Burt was rewarded with one of the film’s 10 nominations.

Burt, a Fincher regular for the past 15 years, won the Oscar for the director’s “The Curious Case of Benjamin Button” in 2009. He is nominated alongside set decorator Jan Pascale, who was previously in this category for the black and white “Good Night and Good Luck.”

Burt has an intriguing take on designing in black and white, as he explains in this exclusive video (above). Unlike cinematographer Erik Messerschmidt, who told TheWrap that all his memories of making “Mank” are in black and white, Burt found himself embracing the color wheel in his gig on the film.

“It was very important to make (the sound stage) look real and use real color tones,” the production designer said. “So when the actors came in they weren’t walking onto a set that was painted green and pink, just because those colors work well in black and white.”

He added, “One of the challenges of this was controlling the color palette. We did an extensive amount of research and testing. We realized that certain colors worked better than others in giving us depth for black and white. We did a lot of glazing to the walls and a lot of overlays of color on the walls to give it some depth.”

And in the video, you can see what Burt is saying thanks to these color stills from the film’s production, showing Oscar nominated actors Gary Oldman and Amanda Seyfried in full colorful bloom. Charles Dance also appears in all the orangey grandeur of the massive Hearst Castle hallway that Burt designed for “Mank.”

Fincher, to be very clear, has no plans whatsoever to release “Mank” in a colorized version. (Though last year’s big Oscar winner, Bong Joon Ho, did do the inverse by presenting a black and white version of his “Parasite.”) However, these photos are a fascinating glimpse into the making of “Mank,” and how much the production balanced itself between the color and non-color worlds. 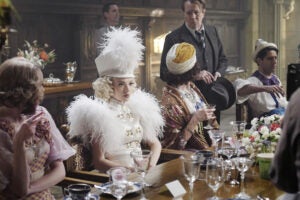 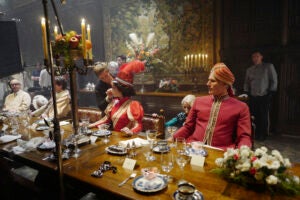 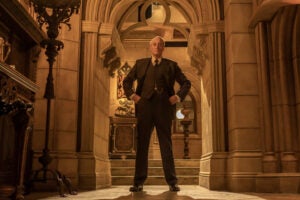 “Mank” is available for streaming on Netflix. The 93rd Academy Awards will air on April 25.