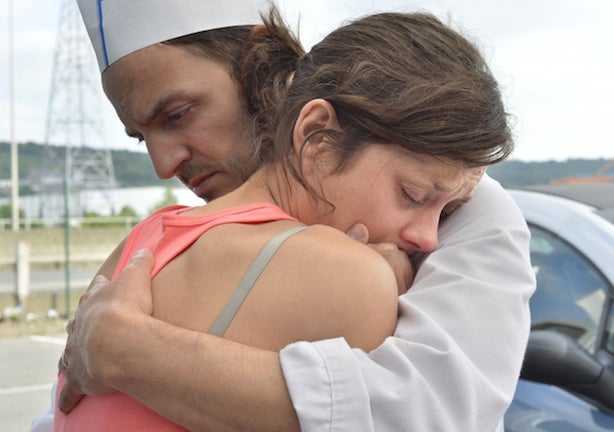 Jean-Pierre Dardenne and Luc Dardenne have made the best film of the Cannes Film Festival so far with “Two Days, One Night.” With this suspenseful saga of a woman on the verge of losing her job, the Dardennes highlight the economic crisis framed within the context of human nature.

What would you do if your hefty bonus came at the price of one of your co-workers losing her job? Do you need the money enough to sell someone down the river? Or do you value your own integrity, no matter what the cost?

That is the dynamic at play within this exceptional film. Marion Cotillard plays Sandra, a wife and mother of two who is one lost job away from losing the mortgage on her house and going on welfare. Despite her resistance to “looking like a beggar,” her ongoing battles with depression and her dependence upon anti-anxiety drugs, Cotillard’s Sandra decides to muster up what fight in her she has left to speak to her co-workers, one agonizing visit after another.

Each time Sandra speaks to a person she’s worked with — some for years, some for a short time — more of their character is revealed, and in some cases, their own desperate economic straits become clear. This isn’t easy an easy decision for anyone living on the edge, and $1,000 Euros (something like $1,300) would do many of these working class families a world of good.

Sandra is barely holding as it is and she’s close to giving up. But her husband pushes her to follow through. What do they have to lose?

Everything, Sandra argues. How will her co-workers treat her once they see she’s convinced them to give up their bonuses?

The story unfolds deliberately, slowly, carefully, effortlessly – exhibiting nothing short of masterful filmmaking and storytelling of the kind we rarely see anymore in any film, but especially so in American film. Imagine our filmmakers making a movie where a woman is fighting for her job. A woman! It would be recast as a man, for starters, and there would be murder attempts, bank robberies, etc.

But the Dardennes achieve the same level of suspense without adding any ludicrous plot points. The good and bad that resides in each person, to whom do they choose to listen to and why, are far more moving, far more powerful questions.

By continuing to work in French cinema, Cotillard is preserving her versatility and her clout as a leading actress. As Sandra, she never loses sight of what is at stake. Her emotions are always being swallowed, like the anti-anxiety pills and water she drinks. The camera rarely leaves her face. To this end, it is reminiscent of Hitchcock, particularly the first hour of “Psycho,” where we watch Marion carry out her mundane duties.

Cotillard lets us in but also occasionally surprises us with what ultimately comes out of her mouth. It is a brilliant, fully realized performance, this “heroine for all time.”

Watching the interior struggle of Sandra is a reminder that women don’t have to always be defined by “women’s issues.” They are half the participating members of society. If you don’t value them, as American films repeatedly fail to do, you are simply not telling any kind of truth. Moreover, you are helping to raise whole generations of young Americans who don’t value women either. Here, the Dardennes simply tell an important story. That the lead happened to be female was beside the point.

Most unexpected and moving of all, though, is that Sandra becomes stronger throughout the course of the film. She is still fragile enough to break, no doubt, but the fight becomes about more than just her own job. It becomes about community and basic human kindness, something that is quickly abandoned when the money starts running out.

This is storytelling at its absolute best. “Two Days, One Night” is now the frontrunner to win the Palme d’Or, as no other film in main competition is so complete. A win would make them the first directors to win three Palmes.

Though the Dardennes often manage to steal the show here at Cannes, here’s hoping the movie expands stateside so that American filmmakers might take a hard long look at what they’ve been contributing to the collective.

It is doubtful that American audiences can ever be trusted again to come to the cinema in mass for a film like this. Such is the way of things now. But that doesn’t mean there shouldn’t be a reaching nonetheless, a shift towards the thing that makes film even worth making in the first place — to move people, quite simply, with the power of story.