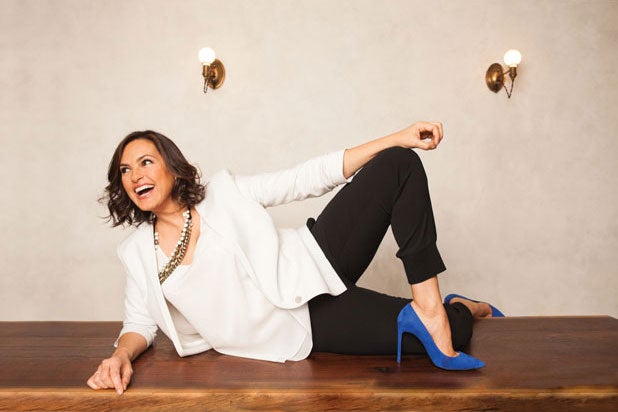 From down the block on a sunny spring day in the East Village, Mariska Hargitay‘s voice came wafting through the air — deep, resonant and in charge of the situation. “Get out of my game,” she smilingly commanded the photographer who was coaxing the actress into a pose.

After 15 seasons of playing detective Olivia Benson, Hargitay has not only grown into her own confident womanhood but embraced the melding of her character with…her character. “I’ve become Olivia Benson in a lot of ways,” she said.

Few actors would admit to the real-life impact their fictional lives have. But playing a detective who seeks justice for victims of sexual violence with the intensity of an avenging angel has informed Hargitay’s other life as a woman,  a mother and now an activist. And absorbing the deep emotional trauma of victims who continually share their experiences with her in random encounters and in year upon year of fan mail has in turn deepened her ability to inhabit her character.

It has also led to an unexpectedly powerful 15th season of “Law and Order: Special Victims Unit.” At a time when most actors would have let the air seep out of their roles, Hargitay took on arguably the most challenging storyline of her career — and she tackled it without the support of her trusted partner Chris Meloni, who left the show in 2011. This past season Olivia Benson became the victim, assaulted and kidnapped — tied up and thrown in a trunk — by a psychotic rapist with deceptively jaunty looks. The entire season was so grueling that at its end, the “Law & Order” team opted to take an earlier hiatus than originally scheduled, in order to give everyone — particularly Hargitay — a break.

“It was the hardest thing I’ve ever done in my life, hands down, acting-wise,” she said.

As a viewer, it stood out from years of seeing Det. Benson with her gun slung on her hip, staring down at some perp with a determined snarl. The scenes of her tossed in a trunk with a gag around her mouth, or as a terrified woman tied to a bedpost and entirely at the mercy of a violent criminal, were nothing short of mind-bending.

Photographed by Jayne Wexler for TheWrap

Hargitay, who also directed an episode this past season, said she reveled in the challenge. “I love that it happened to me,” she said. “Violence happens to anybody. I wanted to show how horrible it is. There’s an archaic belief system about sexual violence — blame it on what she’s wearing, she was drunk, he was a nice guy, she’s a slut. A lot of things.

“But if you’re like me — a bad-ass, gun-wielding, fearless lioness — and even she can be a victim of sexual assault, that says something.”

It does. It also means that Hargitay is finding new depth in a role that she’s done for longer than most shows are on in re-runs.

“I thought I was done when Chris Meloni left, that this season would be my last year,” she said. “We discussed the arc of the season and what I want the end for Olivia to be. But we are in this arc that has challenged me so deeply, I’m more on fire than I’ve ever been. I thought, ‘There’s more to mine here.’ So Warren [Leight, the show’s co- writer] knows I’ll go anywhere, and he’ll go anywhere. I’m still here because I’m happy.”

How did a child of Hollywood royalty  get here, standing up for rape victims and facing down the grittiest of roles? She was born in Santa Monica and grew up in sunny California in a charmed circle of good looks, celebrity and privilege. And yet in some ways there have always been direct lines between Hargitay and her on-air, working-class character.

Even casual observers of Hargitay’s career are aware that her mother was the famous pin-up queen Jayne Mansfield, and her father was the actor and body-builder Mickey Hargitay. On the day of this interview, someone tweeted Hargitay a head shot split down the middle: Jayne Mansfield on one side, Hargitay on the other. They look like the same person. At 50, Hargitay is as beautiful as she has ever been, her wide-set dark eyes alight in intelligence and intensity as she speaks.

But her life is limned by tragedy. Mansfield was killed in a freak car accident in Louisiana in 1967 in which Hargitay and her two siblings were in the back seat. Hargitay, who was three at the time, came away with a scar on the side of her head and an indelible awareness of loss.

Her TV character Olivia Benson has physical and sexual abuse in her past, part of what drives her mission to heal others, to avenge violence against the weak. “When you experience severe trauma as I did at an early age, you get it,” Hargitay reflected. “As a child, I paid the price. When you lose a parent, there’s always a hole there.”

It’s part of what originally drew her to Benson. “There’s a hole in my heart for sure,” she said. “Everything that’s happened, including my success, is what has made me what I am. It’s given me strength, and redefined me. I was very strong because of my father. It’s who I am as a woman — strong, with an enormous amount of vulnerability and pain. It’s certainly Olivia. We come from the same pain.”

She said her father became the true north of her childhood, who taught her about family and strength and stability. “He said family is everything. My love of my family is what made me yours,” she said, referring to her audience. “The way I love, and what family means to me, is what makes me do what I do.”

She added, “People identify with Olivia. She’s a protector, a lioness, maternal, empathetic. She seeks justice, she needs justice. There’s an emotional through-line with her. She protects victims with ferocity, how I would protect my children.”

It makes her powerful, and it also makes her vulnerable. Motherhood, coming later in life for Hargitay, is the other facet that has deepened her work on screen. In 2004 she married Peter Hermann, an actor she met on the show. (Hargitay conducted a not-insignificant portion of the interview with a dead-on German accent that kept the photo crew in stitches, a nod to Hermann’s background.) They have three children between three and eight; two of them are adopted, all of them are adorable and Hargitay pulled out her phone to show them in costume at a recent family outing.

“Being a mother has changed me as an actor — given me greater depth,” she said. “There are things you can’t understand before you’re a mother. It was a marker for me, a rite of passage.”

She married late, but didn’t think about it too much. “I wanted to be married once. And my inner voice said, ‘You’re not ready.’ My Dad always said, ‘Find out who you are, and then find out who’ll go with you.'”

Hargitay won the Emmy for Outstanding Lead Actress in a Drama Series in 2006, and was nominated eight consecutive times between 2004 and 2011. But she hasn’t been nominated since then, and she’s not shy about the fact that she believes her recent work deserves a closer look by her colleagues.

But what truly drives her passion at the moment–apart from her kids–derives directly from her 15 years on “SVU.” That is her non-profit group Joyful Heart Foundation, which she founded in 2004 to support survivors of sexual assault, domestic violence and child abuse. Hargitay wears a small blue circle on her jacket, the symbol of her foundation, and at the first opening took a long detour into the problem of uninvestigated rape kits.

“As painful as it is for me, it thrills me that rape is on the cover of Time magazine,” she said. “The tide is turning. There are things people swept under the carpet for years. And it’s scary. Now is the time to talk. If we talk, justice can be served. People can be healed and crimes can be prevented.”

She continued: “I didn’t know I had this activist piece in me, but it’s 50/50 now. Why are we here? To be of service. And I do feel so hopeful about the change for women’s empowerment. I’m a 50-year-old woman on a successful TV show that for 15 years has shed light on darkness. The fact that I get so much mail from girls who say, ‘You’re my role model, I want to be like you,’ means the world. And I’m not done. I’m not done cooking.”