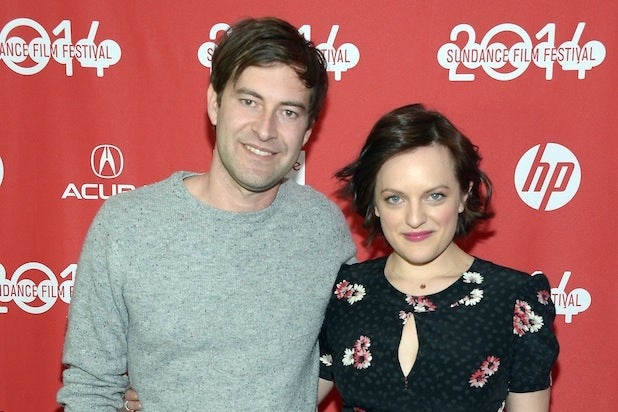 It is a small miracle that the unexpected, very conversation-friendly plot twists of “The One I Love” largely have stayed secret since the film debuted at the Sundance Film Festival in January, especially since the movie became available on VOD last month. Nonetheless, with three days until the movie finally hits theaters, TheWrap will not be spoiling them now.

There are complications that come with that pledge, though, including how to handle interviewing the stars of the film, Mark Duplass and Elisabeth Moss. They are both very affable and open, but obviously, they want to protect the film’s plot. Here’s what we can say: They play a married couple mired in a funk after the initial glow has worn off, and seek to reconnect with their past love.

Given that theme of looking back on the past, TheWrap quizzed the pair about their own pasts. It got silly.

TheWrap: I had a few questions inspired by the movie, since it’s so hard to talk about the film itself. If you could go back in time ten years, what would you tell your younger self?

Moss: Buy an apartment in Greenpoint.

Duplass: Yes! Buy my fucking apartment in Greenpoint, you asshole, you should have bought that! … I think it would have been take a breath and relax, because 10 years ago, I was fighting an uphill battle to make a film that was watchable, and terrified that no one was gonna like anything that I had made — including myself. I was also a year or two into my relationship with Katie [Aselton], my now-wife, and I think I would have also said, “Chill the fuck out, everything’s going to be fine. Trust the fact that you guys are connected in all these ways. You share work, you share a sense of humor, you share a taste in music, you laugh at the same jokes. You’re going to grow up and you’re going to work really hard at this relationship and it’s going to be fine.”

TheWrap: What would you tell yourself, Elisabeth?

Duplass: “I know you can’t pay your rent right now … “

See video: Elisabeth Moss, Mark Duplass Discover a Deeper Mystery in ‘The One I Love’ Trailer

Elisabeth: “I know you’re relying on ‘Law & Order’ residuals … ” Almost everyone says the same thing, which is relax, don’t worry. Which I feel like, you should take that advice now, you know what I mean? Because in ten years, you’ll be telling yourself the same thing: Everything works out, it’s okay, whatever’s bothering you in the moment will probably pass, you’ll get through it. I think I would tell myself the same thing. What was I, 22?

Duplass: Are you less anxious now than you were at 22?

Duplass: I’m actually not that worried about very much.

Moss: Me neither! And even if I do worry, I go, “Remember that time when you were super worried and then everything was fine? Well it’s probably going to be that again, so don’t worry.”

TheWrap: But don’t you think you’re in that position now because you were super anxious and went hard at it?

Duplass: I think I got lucky, I think luck was a big part of it honestly. I got enough to crack in, and then beyond that, it was a lot of work that kept me there. But I’m like, definitely at this point now, and I can’t speak for you, but I’m just way further along in my career than I ever thought I would get. When I was dreaming about my career, it was get a movie into Sundance, and then try to get it on Netflix somehow. That was like the dream, and I’ve shattered through that roof in a crazy way.

Moss: Your dreams are coming true!

Duplass: It is crazy, I look around and I say, okay, John Cassavetes was my hero, because he got to go act in these movies, he’d make money, and then he’d go home and make whatever he wanted with his wife and his friends, and that’s exactly what I’m doing. I’m the luckiest person.

TheWrap: What about your past self do you laugh at?

Duplass: There’s so much great stuff. I’ve got a couple of superficial items. Big lamb chops until I was like 23, and a little soul patch thing was there. That was my sensitive singer-songwriter phase. I was waaay into Shawn Colvin, I was doing this troubador thing. I had a couple pairs of Tevas.

Moss: What are Tevas?

Duplass: But mostly, I went to a Jesuit high school, and when we were 18 they took us on a retreat, and I totally forgot this, but they said “write a letter to yourself 10 years from now,” and they mail it to you, so I got it when I was 28. This letter from myself at 18, when I was 28. And it was fucking amazing, fucking hilarious. I was so cocky, I was basically, my 18-year-old self was coaching my 28-year-old self in case he lost his way. Just like, “You know who you are, man, you don’t have to worry about anything.” Just life lessons from this 18-year-old kid who knew nothing about relationships or life or anything.

Moss: You got this, bro! What an amazing idea, I kinda want to do it now.

TheWrap: So what would you laugh about yourself from ten years ago?

Moss: I’m still laughing at myself. I don’t know that I’m that different, hopefully I’ve gotten a little bit smarter about stuff, certain things. I would laugh probably at how serious I would take relationships. When you’re 22, every guy that you meet is like, oh my god, this is it, he’s the one. Ten years later, you’re like, oh yeah …

Duplass: You wanna hear something crazy? Katie was 22 when we met.

Moss: That’s crazy! She was?

TheWrap: So where will you be in ten years?

Moss: I only have hopes, I don’t know what I’ll actually be like, but I hope I’ll honestly be doing the same thing.

Duplass: You’ll have directed a movie within the next 10 years.

Duplass: 100 percent. Lizzie has filmmaker brain. It’ll come to you.

Moss: You’re so sweet! He’s been really, really kind about that. He’s really really nice, he thinks I’m a filmmaker.

Duplass: Hopefully it’ll be via volition, but it could be one of the darker things, like, “Oh fuck, now I’m in my 40’s, I’m not getting the roles I want, but I’ll do it myself!” I don’t know what I’m going to be doing, I think I’m going to be moving slower. I think I’m slowing down on my productivity, and the crazy thing to think about is that my daughter will be 16, and I will be panicking knowing that she’s leaving the house. I saw “Enough Said” on the plane over here, and there was a moment where she lets her 18-year-old daughter go off to college, and I just burst into tears spontaneously.