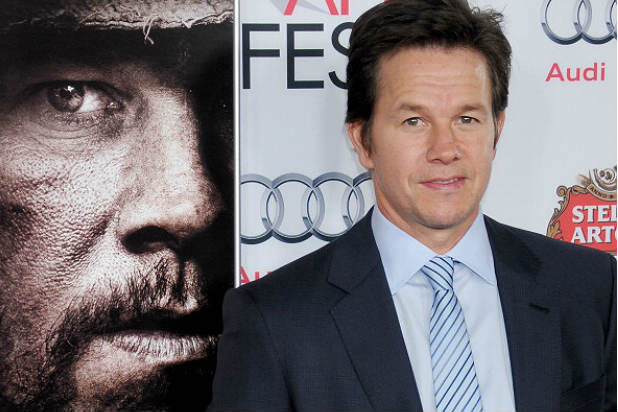 Note to awards-season moderators: Don’t ask Mark Wahlberg if filming “Lone Survivor” was anything like actually being a Navy SEAL, or experiencing live combat, or even if making movies is a hardship of any kind.

In light of the film’s real-life subject matter, he’s not having it. Not even if you’re Tom Cruise.

UPDATE:On Nov. 14, a day after this Q&A, Mark Wahlberg stated that he was aware that someone had made this comparison, but did not know it was Tom Cruise*. Details here: Mark Wahlberg Says He Wasn’t Cursing out Tom Cruise

Wahlberg let it bleed onstage nearly as much as onscreen Tuesday night, following the world premiere of “Lone Survior,” the brutal, harrowing — and yes, uncomfortably bloody — true-life tale of three SEALS who went on a dangerous kill mission deep in Afghanistan.

That SEAL, Marcus Luttrell, joined Wahlberg and director Peter Berg for a post-movie Q&A, and it was clear that Wahlberg hadn’t completely processed what he’d just seen at the Chinese, where the film screened for a stunned and reverent AFI Fest audience.

Asked about the difficulty of the shoot, the actor went on an emotional tear, evincing a raw and heartfelt respect for the real sacrifice he’d portrayed, and not much respect for anyone who might suggest that filmmaking comes close to its degree of difficulty.

“I don’t know it just hit me in a way that uh … I don’t know, it just really upset me that those guys were never gonna see their families again. For actors to sit there and talk about ‘Oh I went to SEAL training,’ and I slept on the — I don’t give a fuck what you did. You don’t do what these guys did. For somebody to sit there and say my job was as difficult as somebody in the military’s. How fucking dare you. While you sit in a makeup chair for two hours.”

Wahlberg may have been coyly referencing a recent media dust-up over Cruise, whose lawyer suggested in a deposition in the actor’s $50 million libel case against Bauer Media that being away from his daughter for a long movie shoot was akin to “serving in Afghanistan.” Those remarks were quickly clarified – it turns out that Cruise immediately responded “Oh come on. You know, we’re making a movie” – though the “Tropic Thunder” star did elaborate at great length about just how difficult that can be.

Wahlberg never specifically referenced Cruise, but he did make it very clear that no matter how long the hours or difficult the conditions, filmmaking and soldiering don’t belong in the same conversation.

“I don’t give a shit if you get your ass busted. You get to go home at the end of the day. You get to go to your hotel room. You get to order fucking chicken. Or your steak. Whatever the fuck it is.”

Wahlberg did say the cast experienced at least one SEAL-like phenomenon while shooting in the mountains of New Mexico (a fairly convincing stand-in for Afghanistan, at least to American eyes): a major bro-down.

“People talk about what do we do to bond the way that those guys bonded. We just knew what they did. It didn’t matter. I didn’t have to say a word to Emile (Hirsch) or a word to Taylor Kitsch, Ben Foster … who’s my brother even though he’s the kind of actor who wants to continuously debate the debate and everything else … and I love him for it.”

Then Wahlberg suggested something even more on-the-sleeve, at least by Hollywood standards – that he forfeited some serious cash to ensure Foster (right) would come aboard the Emmet/Furla Films-produced project that’s destined for the awards conversation, at very least.

“I gave him half my salary, whatever I gave him, to do it because I knew how great he was and for us to be on that mountain together and in the end of it, I could just look at him and it would break my heart knowing that – God, that’s my brother and I may never see him again.”

And with the audience eating it up, Wahlberg went back to rhapsodizing about the real-life sacrifices of the man he was playing, sitting just two chairs to his right — while blasting Hollywood privilege.

“I trained for four and a half years and I was ‘The Fighter’ and … fuck all that. It really means nothing. I love Marcus for what he’s done and I’m a very lucky guy to do what I do and I’m proud to have been part of it, but it’s just so much bigger than what I do.”

Wahlberg carried on like this for several minutes, brow furrowed and hand to his forehead, swept up in the emotion of what he was saying and feeling. He ended the soliloquy with a tribute to Berg, the director’s insistence on authenticity — and the real SEALs’ input to ensure it.

“I love Pete for what he did and how committed he was. He would never let any one of us forget about what was important in the course of making the movie and whether it was Marcus or the other SEAL guys. If they saw something that didn’t ring true, I don’t care if it was going to be the biggest stunt sequence in the movie, they would cut, call bullshit, and grab all of us by the fucking back of the neck and say ‘No, do it this way, and do it right and make it real’ and if you don’t it’s a problem. I was really proud to be a part of that. And I’m sorry for losing my shit. I’m gonna … (inaudible, applause). Don’t ask any more questions tonight.”

*an earlier version of this story mentioned Cruise in the headline.

Watch video of the Q&A below: