In 1973, Marlon Brando sent a Native American actress, Sacheen Littlefeather, to reject his Best Actor Oscar for “The Godfather.” Instead, she offered a firm, passionate plea for better Hollywood representation of Native Americans.

But Brando and Littlefeather’s story didn’t begin there. Four years earlier, both Littlefeather and Brando had taken part in a remarkable takeover of Alcatraz Island — an occupation that is is the subject of our latest “Shoot This Now” podcast. We invite you to listen on Apple or right here.

The takeover of Alcatraz by Native American activists was one of the most dramatic, and wittily subversive, protests in American history. In November 1969, the activists landed on the island and declared that they had “discovered” it — just as Europeans had claimed to discover America, even though it was obviously already populated.

They held the island for 19 months, even as federal negotiators, the Coast Guard and the FBI tried to drive them off.

They issued the Alcatraz Proclamation, which included bitterly funny but pointed criticisms of U.S. policy — and offered the same price for Alcatraz that Europeans had paid for Manhattan. (Twenty-four dollars, according to legend.) They also asked that the island, which had not been used as a prison since 1963, be turned into a site dedicated to Native American studies and spirituality.

Their cause drew support from celebrities like Brando and Jane Fonda, who visited Alcatraz, and rock band Creedence Clearwater Revival, which donated money for a boat called the Clearwater that carried activists to the island.

Among those activists was Sacheen Littlefeather, a college student at the time.

The Alcatraz Occupation was a time of cultural awakening for Littlefeather. An Apache and Yaqui born Marie Cruz Sacheen, she learned more about her cultural identity from the other Native Americans who took part in the occupation, she told the Native Times in 2010. She said her Navajo friends gave her the name “Sacheen,” which means “little bear.”

Brando’s activism for Native Americans predated Alcatraz. In 1964, Brando was arrested but not charged for taking part in a “fish-in” that Native Americans staged on the Puyallup River. He and Fonda were among several celebrities who visited Alcatraz to show support for the activists.

But Brando and Littlefeather apparently didn’t meet at Alcatraz. The Globe and Mail said they first made contact when she wrote him a letter asking if he was truly interested in Native American peoples’ rights. He called into the radio station where she worked about a year later, she said.

She told the Native Times she met Brando in Washington, DC, when she was giving a presentation to the Federal Communications Commission.

“I was a spokesperson, so to speak, for the stereotype of  Native Americans in film and in television. All I was saying was, we don’t want Chuck Conner playing Geronimo,” she told the the Native Times.

Littlefeather told the Globe and Mail that Brando asked her just one day ahead of the Oscars time if she would decline the award on his behalf. She didn’t have an evening dress, so she wore a traditional one made of buckskin.

At the March 27, 1973, ceremony, Littlefeather took to the stage when Brando was announced as Best Actor. When Roger Moore offered her the Oscar, she held out her palm to refuse it.

Littlefeather said she would give the news media a copy of a letter Brando had written about atrocities committed against Native Americans. You can read it here.

And she was interrupted by rude noises and boos.

“Excuse me,” she said, to applause that drowned out the boos, then continued her statement.

“… and on television in movie re-runs, and also with recent happenings at Wounded Knee.” 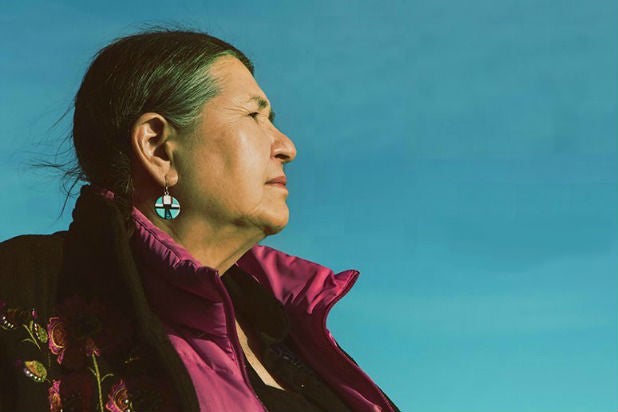 She was referring to a standoff between Native Americans and government agents in Wounded Knee, South Dakota, where Native Americans were staging another demonstration to stand up for their rights. She later told the Los Angeles Times that the FBI had tried to black out news about Wounded Knee, but that the Oscar broadcast helped publicize it.

Littlefeather ended her remarks by saying she hoped that in the future, “our hearts and our understanding will meet with love and generosity.”

She left the stage to more applause. But when she left, she said, none other than John Wayne was waiting, ready to physically remove her. He had starred in exactly the kinds of films she had talked about.

“He had to be restrained by six security men,” she told the Globe and Mail.

Littlefeather was scrutinized after the speech, and even falsely accused of being an imposter. Though she wanted to be an actress, the industry shut her out, she said. She went on to work in health and nutrition.

“I am working with death and dying at the present time in hospice work. That has been particularly beautiful for me, a great honor to work with those people who are crossing over to the spirit world,” she told the Globe and Mail in 2016.

In March, a representative for Littlefeather said she was battling cancer.

Here are Littlefeather’s remarks at the 1973 Oscars: