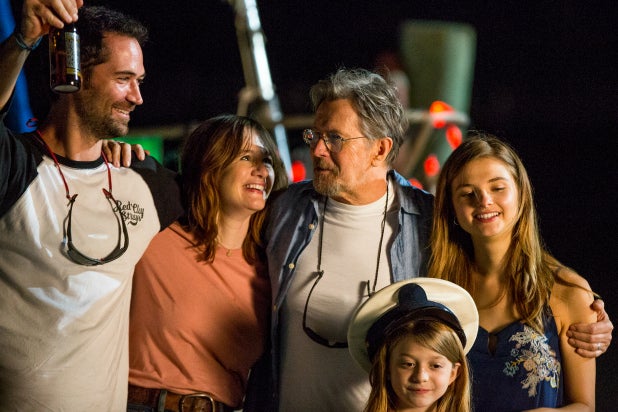 You won’t find a horror movie with more barnacles on it this year than Michael Goi’s “Mary,” but that would be true even if this nautical nightmare was seaworthy. The supernatural thriller “Mary” takes place almost entirely on a haunted boat, and those arthropods make a cameo appearance that’s only slightly more memorable than anything Oscar-winner Gary Oldman is doing above the waterline.

Oldman stars as David, a fisherman who’s been working on other people’s boats his whole life and dreams of owning his own boat. His wife Sarah (Emily Mortimer) sends him a picture of a boat she found at auction, but when he gets there he only has eyes for a derelict fixer-upper named “Mary,” the same name as their youngest daughter.

It’s fate, David argues. It’s a money pit, Sarah counters, but she quickly defers to her husband’s poorer judgment. He apologizes for making the impulse buy, but she says he shouldn’t apologize, that she should be the one apologizing. She also calls herself an idiot. He doesn’t argue, and they let it go at that.

Normally in a horror movie, a relationship as obviously fraught as David and Sarah’s would be explored. But not so much in “Mary.” Goi’s film, written by Anthony Jaswinski (“The Shallows”), is quick to blame Sarah — she’s the one who had an affair; she’s the one who has to atone. It’s a one-sided and frustrating relationship to watch, and the sudden application of the supernatural does little to bring its anxieties to the surface.

It doesn’t take long for David and Sarah, their daughters Lindsey (Stefanie Scott, “Beautiful Boy”) and Mary (Chloe Perrin, “Glow”), and a couple of ship hands to fix up the boat and head out on the open waters. But no sooner are they a-sea than Sarah starts having creepy dreams, Mary starts acting all spooky-like, and Lindsey’s boyfriend Tommy (Owen Teague, “It”) starts mutilating himself.

There’s something wrong on this ship, Sarah quickly surmises, but they’re already more than halfway to their destination. But hey, it’s not like there’s a ghost witch on the boat that’s trying to steal their children.

By the way, there’s a ghost witch on the boat that’s trying to steal their children. The movie tells you so right in the opening frames, with a title card scrawling out an ancient poem about a ghost witch stealing children. It’s a scary idea, and yet it has so little to do with the actual drama in “Mary” — a story otherwise based on marital anxieties, as opposed to parental fears — that the whole film plays like an extended non sequitur.

As if it was necessary to torpedo “Mary” any further, the film is told in an extended flashback as Sarah tells a detective, played by Jennifer Esposito (“The Boys”), how their ship got destroyed. That framing device puts all the emphasis on the mysterious ending of the story, which Sarah’s dialogue foreshadows so quickly it’s hardly a surprise. It’s extremely difficult to get wrapped up in the immediacy of a ghost story, in which so many of the frights depend on uncertainty, when the movie itself isn’t entirely in the moment.

There are moments in “Mary” when the eeriness of the concept takes hold of you, as you remember that all the creaking noises, looming darkness and horrible isolation that earmark the haunting genre are amplified in a creaky boat floating alone in the ocean. Michael Goi, serving as both director and director of photography, does a better job placing the camera around the claustrophobic location than he does exploring the depths of his actors.

Oldman makes very little impression as David, and the supporting cast doesn’t fare much better. Mortimer carries most of “Mary” all by herself, and if the movie was more interested in her character’s journey — as opposed to her judge-y husband, a villain with no thematic ties to Sarah’s journey, and the predictable machinations of the plot — she could have pulled it safely to shore.

Instead, she’s adrift in a film with a good set-up but little cohesion. “Mary” is only ship-shape in that it’s literally in the shape of a ship. And my, she ain’t yar.