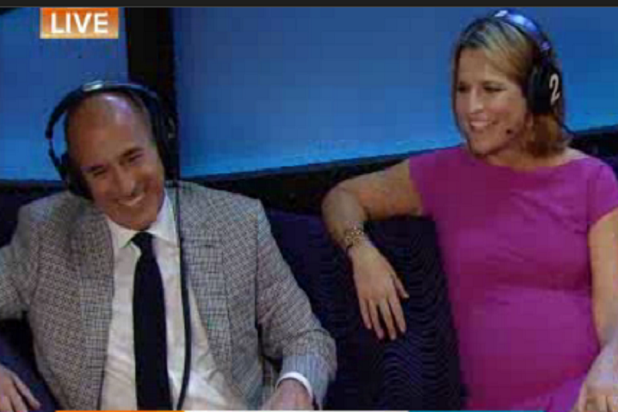 Howard Stern did his best to get some firm answers from “Today” co-hosts Matt Lauer and Savannah Guthrie about the NBC morning show’s ratings and the prospect of Katie Couric coming aboard the show, but mostly came away with evasive answers on Tuesday.

Stern hosted Lauer and Guthrie in his SiriusXM studio as part of the “Today” show on Tuesday morning, grilling a pregnant Guthrie about her upcoming maternity leave, and whether she was worried that she might be let go from the show while she’s gone over the next couple of months.

Stern then honed in on replacements for Guthrie during her leave, specifically asking her whether Katie Couric might come aboard. (Stern revealed that Couric had previously told him that she hadn’t engaged in talks about hosting on “Today.”)

Stern then broached the topic of ratings.

“It would be great for the ratings if you had the baby and then you had post-partum depression,” Stern posited, suggesting that the condition would make Guthrie more relatable to many women.

The self-described King of All Media leaned in harder on the ratings question, asking Guthrie, “Do you secretly hope, that when you’re on maternity leave, the ratings go down without you there?”

“You know what, Howard?” Guthrie evaded. “I plead the fifth.”