Max Julien, the actor best known for playing a pimp named Goldie in the 1973 Blaxploitation classic “The Mack,” has died. He was 88 years old.

Julien passed on his birthday, January 1, according to writer and producer David F. Walker. Walker announced the news on social media, hailing Julien as “a great human being.”

“I met Max back in 1996. He was a great human being, and we had so many amazing conversations,” Walker wrote alongside a photo of Julien. “He was brilliant and hilarious and charismatic… R.I.P”

In a statement to TMZ, Julien’s team remembered Julien as a person who was “known for being bold, honest and straightforward.”

“He would live and speak his own truth both professionally and privately,” the statement said. “He was thought of as a rare ‘man among men.'”

In “The Mack,” Julien’s character Goldie was a former drug convict who becomes a high-level pimp in Oakland, California, flanked by a man named Slim, played by Richard Pryor. Goldie and Slim face off against corrupt cops and other crime lords, and over the years, “The Mack” has become a classic of the Blaxploitation genre. 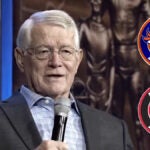