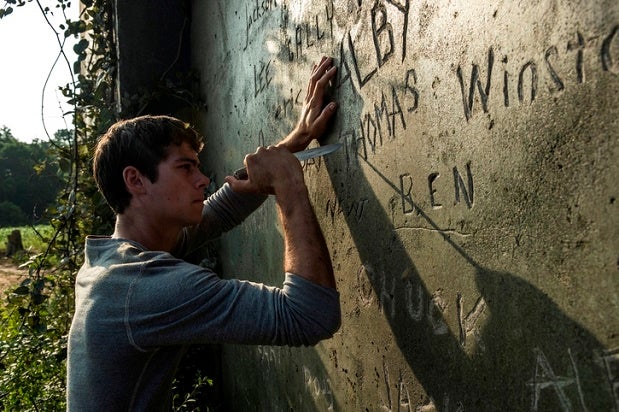 “The Maze Runner” turned a best-selling young adult novel into box office gold — and a new film franchise — this weekend. The sci-fi saga, powered to a teen-fueled $32.5 million box office, triumphed in its debut.

The weekend’s two other wide openers were rated R and targeted an entirely different audience in mature moviegoers, but couldn’t keep up with “Maze Runner.” Liam Neeson‘s “A Walk Among the Tombstones” finished a distant second with $13.1 million and the family comedy “This Is Where I Leave You” was third with $11.8 million. Last week’s No. 1 film, the thriller “No Good Deed,” was fourth with roughly $10 million.

A big Friday night for “Maze Runner” — in which TV”s “Teen Wolf” star Dylan O’Brien plays a young man trapped in a mysterious labyrinth — sapped the suspense out of the weekend race. But the strong showing is a significant win for Fox, which on Sunday announced that a sequel, “Maze Runner: Score Trials,” would be released in September of next year.

Despite the success of “The Hunger Games” and “Divergent,” tapping into the notoriously fickle young adult crowd isn’t easy, and there have been many more misses than hits, including “The Giver” and “The Host.” This weekend’s score with the adaptation based on James Dashner’s novels is the second in a row in the genre for Fox, which connected in June with “The Fault in Our Stars,” which was based on a tear-jerking novel. And like that film, “The Maze Runner” had a relatively modest budget, just $34 million.

Most importantly for the studio, it has launched a young adult franchise, something that’s never been done in September before. Helping make the decision easier for the studio was the film’s $34 million overseas haul this weekend. That means “Maze Runner’ brought in more than $81 million globally this weekend — more than double its production costs.

O’Brien’s popularity, and the fact that unlike the stars of most YA movies he’s male, gave “Maze Runner” a broader target demographic, and it connected. Sixty-four percent of the audience was under 25 and at 52 percent female, was nearly evenly split by gender. It received an “A-” CinemaScore.

Also read: Fox’s Resident Futurist (Yes, They Have One) Uses ‘The Maze Runner’ to Showcase Future of Film

Fox had “Maze Runner” in 3,604 locations, including a full run of Premium Large Format and IMAX theaters, which provided a combined $6.3 million. PLF screens accounted for 10 percent 10 percent of the grosses, and IMAX brought in nine percent and accounted for eight of the top ten locations.

The launch this month, typically the slowest of the year, was a gamble by Fox but may have worked in its favor.

“We did all we could to ‘event-ize’ this movie and that, along with our male star, the big-screen runs and a movie that delivered all came together for us,” said Fox distribution chief Chris Aronson.

Universal’s “A Walk Among the Tombstones” didn’t match the success of recent Neeson thrillers like “Taken” or “Non-Stop,” which opened at No. 1 with $28 million in February. That’s due in part to the more restrictive rating and the darker tone of the film. The profitability bar is lower on “Tombstones” than on some of Neeson’s other films however, because its production cost was just $23 million.

Scott Frank wrote and directed “Tombstones,” which is based on a Lawrence Block novel and has Neeson playing an ex-cop lured out of retirement to help a drug dealer find his kidnapped wife. It was produced by Jersey Films’ Danny DeVito, Double Feature Films’ Michael Shamberg and Stacey Sher, Exclusive Media’s Tobin Armbrust and Cross Creek Pictures’ Brian Oliver.

The “Tombstones” audience skewed predictably older (77 percent over 25) but surprisingly female, with women making up 51 percent of the crowd. They gave it a “B-” CinemaScore.

The three-day tally for Warner Bros. “This Is Where I Leave You” is a decent start for the ensemble comedy, which the studio hopes will find its audience over the next few weeks.

Also watch: Jane Fonda Flashes Drivers With Her ‘This Is Where I Leave You’ Breasts (Video)

Shawn Levy directed the $20 million multi-generational tale, which stars Tina Fey, Jason Bateman, Rose Byrne, Jane Fonda, Corey Stoll and Adam Driver. Jonathan Tropper wrote the novel upon which the film is based and the screenplay, which follows four squabbling siblings who reunite at their childhood home after their father dies.

The crowd at the film’s 2,868 locations was older (86 percent over the age of 25) and female (63 percent) and they gave “This Is Where I Leave You” a “B+” CinemaScore, which should help with word of mouth.

The overall box office wound up roughly 22 percent ahead of the comparable weekend last year. It’s the second weekend in a row that the box office has out-performed last year, but 2014 is still running about six percent behind 2013.