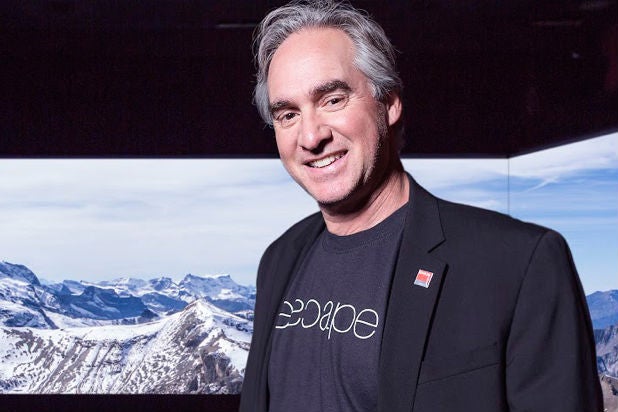 By most standards, Ted Schilowitz has an amazing job title — resident futurist at 20th Century Fox. He’s also gone by “leader of the rebellion” at Red Digital Camera and “CinemaVangelist” at Barco.

Schilowitz is a primary reason Fox’s upcoming release of “The Maze Runner” will debut the Barco Escape, an ultra-wide, multi-screen movie format that uses multiple projectors and screens to create a 270-degree panoramic viewing experience.

The setup allows audiences to look around during certain scenes to see peripheral visual content on the side screens that further immerse the viewer into the movie. The concept excited Schilowitz from the beginning, and he worked hard to help make it a reality with a Fox film.

“We know we can put up a big screen, but it’s not a futuristic choice,” Schilowitz told TheWrap. “But what if we could bring the theme park experience to the theater? What if we can wrap this world around us?”

The Future Is Now

The Barco Escape experience will be available in just five theaters across the U.S. But for those without access to a Barco Escape preview theater in their city, they can access the technology within Samsung Gear VR.

“The Samsung Gear VR is a powerful tool to introduce Barco Escape to the world,” Schilowitz said. “What better way to show what we are working on as we roll out this immersive movie going experience for worldwide audiences than to introduce it along with Oculus and Samsung on their latest Samsung Gear VR headset.”

Schilowitz believes this is just the beginning of the virtual reality revolution. His upcoming projects include virtual reality experiences on Fox Searchlight’s Reese Witherspoon vehicle, “Wild,” and family comedy “Night at the Museum.”

“Every day, we learn something new as we experiment with this new format,” Schilowitz said. “It’s a tremendous amount of fun to collaborate with such forward thinking teams.”

Schilowitz, 50, was on the forefront of the digital revolution as a founder of G-Tech, a manufacturer of media storage devices which was purchased by Hitachi. He also helped develop the video cards for AJA Video Systems in collaboration with Apple. But around Hollywood, he’s probably best known as the founding member and first employee of Red Digital Cinema, where he “led the rebellion” for seven years as the industry transitioned to digital production and post-production workflow.

“If you come to me looking for an expert, you’ve come to the wrong place,” Schilowitz said. “I’m an explorer. I like new things and I like breaking the rules.”

Now, Schilowitz is the person at the Fox advocating for the future of cinema and looking for the next big things. Right now, that includes new theatrical experiences like the virtual reality and immersive multi-screen movie formats.

The futurist credits growing up in central Florida in the 1970s as a primary influence on his passion for innovation. He recalled Orlando’s landscape shift from orange groves to Walt Disney’s visionary theme park.

“I am a child of Disney,” Schilowitz said. “The theme park world, that is my reality.”

So how does Schilowitz manage his day-to-day duties while tracking the future of the business?

“Every day is completely different,” he said of his job. He might spend his day toying around with a piece of equipment or discussing an emerging technology with someone at a startup.

The “futurist” opportunity arose in 2013, when Schilowitz was leading the rebellion at Red Camera as the company’s co-founder and first employee. After traveling the world for seven years to take Red from startup to one of the top digital camera suppliers, Schilowitz tired and began eyeing retirement.

“He said, ‘You’re not really retiring,'” Schilowitz recalled. “Then he said, ‘Your retirement plan isn’t going to work out; you’re going to come play with me.'”

Also read: Dylan O’Brien Wants Answers and a Way Out in ‘The Maze Runner’ Clips (Video)

Gagliano, who shepherded post-production on the original “Star Wars” trilogy, told Schilowitz that he would serve as the studio’s “crystal ball,” someone who could kick around new ideas and would speak his mind about the direction the studio was heading.

“He’s like a little kid about technology,” Gagliano told TheWrap. “He has a nose for these kinds of things. … He’s tech savvy and he’s also very useful in his knowledge in immersive experiences.”

Schilowitz notes that everyone at the studio has been very receptive to his push to keep Fox on the cutting edge.

“Other people at the studio say that I’m ‘fun-employed,'” he said, laughing. “Innovation comes from the edges. You don’t run in to anyone there who doesn’t get it.”