“As a woman of faith, as a mother of baby Blake, as a person who meticulously prepared at some of the world’s hardest institutions, I never lied,” McEnany said Sunday during a speech at Turning Point USA’s Young Women’s Leadership Summit. “I sourced my information.”

McEnany served as press secretary for less than a year at the close of former president Donald Trump’s single term in office, but coverage of her statements from that time doesn’t align with her declaration that she “never lied.” 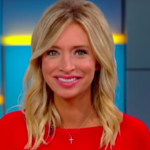 Last September, CNN abruptly cut away from one of McEnany’s briefings after she claimed Trump had never downplayed COVID-19. Anchor Brianna Keilar said, “That was the press secretary at the White House lying. She said the president never downplayed the coronavirus.”

From there, Keilar laid out what Trump did say earlier in the year as the pandemic began, highlighting instances when he said the virus would “disappear” like “a miracle” and “will go away.”

In November, McEnany was quickly called out for reacting to the announcement of then-president elect Joe Biden’s all-female communications team by falsely saying Trump already had an all-female team. Her statement overlooked the men who worked in the White House press office.

PolitiFact, which fact-checks statements from politicians and their representatives, rated a number of her claims from her time as press secretary as false, branding them along a spectrum from “mostly false” to “pants on fire.”