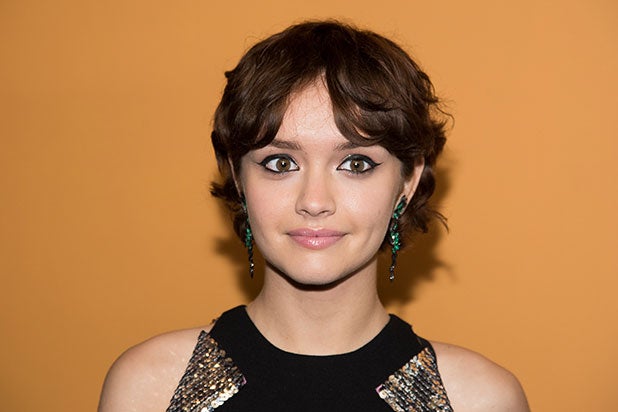 “Me and Earl and the Dying Girl,” a Sundance Film Festival favorite, is hitting theaters on Friday, and TheWrap spoke to the “dying girl” herself, Olivia Cooke, about how she approached playing a character with cancer.

“I didn’t want to portray her as a victim or tragic character, I just wanted to get it right,” the 21-year-old actress told TheWrap in a wide-ranging Q&A covering director Alfonso Gomez-Rejon’s indie coming-of-age drama that won both the Grand Jury Prize and Audience Award in the U.S. dramatic categories at Sundance.

Already being called one of the best movies of the year, the “Earl and the Dying Girl” follows a friendship blossoming between an awkward high schooler named Greg (Thomas Mann) and classmate Rachel (Cooke), who was recently diagnosed with leukemia. Connie Britton, Nick Offerman and Molly Shannon co-star as parents watching the sparks fly between the teens.

Also read: 'Me and Earl and the Dying Girl' Review: Sundance-Winning Teen Cancer Drama Is Clever but Cloying

Cooke, who should be familiar to fans of A&E “Psycho”-inspired drama “Bates Motel,” talks to TheWrap about how she prepared for what may very well be her breakout role, how she got it, who her Hollywood heroes are and being compared to Shailene Woodley.

Also read: 'Me and Earl and the Dying Girl' and 'Dope' Could Wake Up Sleepy Indie Box Office

TheWrap: Why don’t we start by talking about the movie itself. Was there anything specific you did to prepare for the role of Rachel?

Olivia Cooke: Yeah, well you know, she’s got cancer, but I didn’t want to portray her as a victim or tragic character, I just wanted to get it right. I didn’t want the cancer aspect of it to reap through. I just wanted to handle it with honesty and truth. I met a girl [at UCLA] with leukemia named Rachel, and her dad had leukemia two years prior so he was really insightful with answering some questions. Rachel was so positive and lovely and she had gone through so many rounds of chemotherapy. Then I spoke to her doctors and their different patients that had gone through various stages of chemo, and their decisions about treatment and the way it affected them and their parents and their families… so we talked about that.

Then I would create a chart of Rachel’s chemotherapy treatment so I could draw from that when I had to mentally and physically prepare for the stages.

The last scene in the film was pretty powerful – how did you get yourself into that mindset?

I didn’t have to do much. Physically, I looked so drained and I looked so weak. And then they just had the soundtrack lying over the shot, which is so beautiful. You know, even though it’s not perfect, it’s not finesse, it felt so wonderful to see that someone has captured her essence in this brilliantly shot film. It was very beautiful and very emotional. It didn’t take a lot.

Naturally, if you’re in film, you’re always going to get compared to other people. I’m not going to shit on someone else’s movie when I get compared. If people go see this movie because they think it’s going to be like “The Fault in Our Stars,” then they didn’t think this through, you know? It’s a completely different entity, it’s wonderful. But I don’t see myself in her, and I’m sure she doesn’t see herself in me at all.

Also Read: 'Me and Earl and the Dying Girl' Review: Sundance-Winning Teen Cancer Drama Is Clever but Cloying

You play someone who has a sickness on “Bates Motel” too. Do you ever feel like you kind of get typecast?

No, I really fought to get this role myself. It wasn’t like anyone typecasted me, I just really really wanted this role. I got the screenplay through my agent, and then I auditioned like everyone else, and tested the chemistry with different boys. I would’ve done everything to get this role.

What specifically did you love about the role of Rachel?

It was the movie. I’ve never read a screenplay that was so ominous and real. It wasn’t stereotypical for me, it was really really funny; I really laughed. I just wanted to be a part of it.

It was really funny. Everyone was off doing their own thing. I’ve never been on a movie where the whole crew is being paid pickens to be there but they are still giving their absolute upmost and they are all so incredibly talented and everyone added their little eccentric details on the film. It was wonderful – it’s so rare that you get a script that is dying for everyone to do what they can to make it what it can be.

Do you watch all your films and TV shows that you’re in?

I watch it once. I watch “Bates Motel” once when it comes on, but I don’t go back and rewatch.

Given all the gender disparity that is going on right now, do you consider yourself a feminist, and who are your female role models?

Of course I’m a feminist, it would be ridiculous if I didn’t believe in equal rights for women and men. My role models? My mum – my mum is my biggest role model.

Is there anyone in Hollywood that you look up to?

Not really, no. I love Kate Winslet and I love her work, and there are a lot of other little actresses, but I don’t want to be them. I just really want to be the best version of myself, I think. But I do like the trajectory of some people’s careers and things, but I think I am just trying to work out how to be an adult and figure out things about myself.

What has been the most overwhelming aspect for you since your success?

Probably Sundance Film Festival. Sundance was really overwhelming. I was just getting in, and the reaction that followed was just completely overwhelming. It was wonderful to resonate with all these people and I’ve never had that before. It was all inspiring and now I can’t ever go back because it’ll never be like that. If I go next year, hopefully I can stay for a week and watch movies and not do as much press. The film got a really shitty write-up in the Sundance program, kind of building it as “teenage movie about cancer” and no one wanted to go see it! So I don’t think people were expecting it at all.

Also Read: Thomas Mann Falls for Olivia Cooke in First Trailer for 'Me and Earl and the Dying Girl' (Video)

What are your upcoming projects?

I just did a film called “Katie Says Goodbye” by writer/director Wayne Roberts and I’m about to do murder mystery called “The Limehouse Golem” by Juan Carlos Medina. I don’t even know if it’s going back for Season 4. I hope it does, but if it does then I’ll go back too.

“Me and Earl and the Dying Girl” hits theaters June 12.